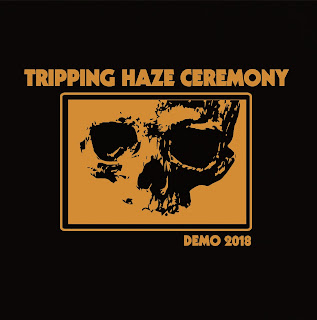 Coming to us from Malaysia, the trio of Tripping Haze Ceremony (you know, good ol' THC) have assembled a three-track demo to introduce themselves to the world. Starting off with the intro track of “Sativa's Trip”, they lay down an atmosphere of psychedelic doom, thick on the sustain and reverb, running up one riff for the length of its minute and change. From there, it's on into the considerably larger “Panhead Dream”, sparked off with a nice conversational sample. The flavors of the intro are brought back for expansion, with a firm central riff anchoring the slow-moving grooves. Vocals are effects-treated and pushed to a distant sound, merging well with the fuzzy groans of the bass, while the drums beat out the slow pace while finding time for some extra spice in the fills. A chill but snazzy guitar solo helps lead things to the song's finish, and then it's on into the last tune, “Night of the Damned”.
The third track again makes use of a solid spoken sample, then delves its way into another thick riff, picking up steam as it rolls into action. The vocals return with their echoing evaporated feel, giving things a nice brain-tingling haze, and the bass keeps on rocking its thing. Though understandably short, being a demo, it still does a good job of setting out the band's style and skills, and there's enough psych doom goodness for fans of that flavor to sink their teeth into and chew a few times. Check it out for yourself, groove on it, and if you happen to handle a label, go ahead and get in touch with these guys if you like what you hear.
~ Gabriel 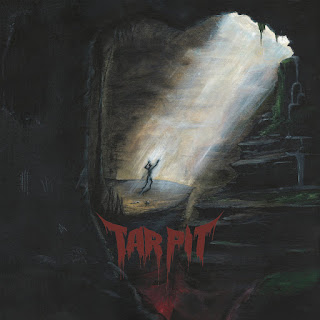 Following a few line-up adjustments and a hard-to-find demo, the Portland-based quintet of Tar Pit have emerged with their debut album, boasting about forty minutes of hot-blooded doom metal across its five tracks. Drawing from the late-'70s/early-'80s vibes of basements, dungeons, and caverns, along with the inclination to build expansive narratives, the group tempers the quirks of yesteryear with some firm structuring, focused production handling, and a meaner demeanor. The tracks flow into each other with fine style, the grooves are deep and dirty, and the guitar solos, when they arise, are both vivacious and suitably downcast.
As the album goes on, it really gets its hooks into you, aided by the clever positioning of the tracks; they start out with the longest song, then gradually shorten them down to the middle, then grow them back out on the way to the end. It's a neat way of accelerating the pace without sacrificing any of the weight, and seeing it put to use on a first album impresses further how much potential this band has. There's nothing to detract from Tomb of Doom's power as an album in its own right, though, with no sign of the fumbles or self-conscious second-guessing that so regularly pop up to pull down early works. If anything, my complaint would be that it feels a little short, but at the same time, that helps them keep it trim and punchy.
While I'll be sour that I won't have a chance to see these guys live anytime soon, that's somewhat salved by the knowledge that a copy of the album is on its way. Check them out for yourself, snag a copy of the cassette pressing if that's a format you rock (only 100 copies made), and keep your ears perked for more to come from Tar Pit. In the musical world, at least, 2019 is starting off on a good note.
~ Gabriel

For Fans Of; Below, Blood Farmers, Goya, Merlin, Saint Vitus 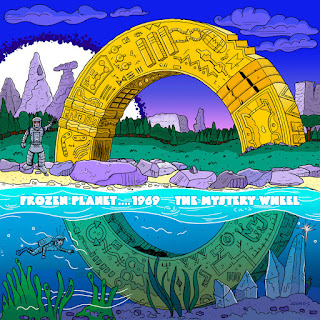 Spawned in the recording sessions for their 2017 album Electric Smokehouse, Frozen Planet.... 1969's The Mystery Wheel is a single 26-minute jam taking listeners through the riffs and grooves filling the Australian band's heads at the time. Heavy and psychedelic, with swanky guitar wonking it up with hard-plugging bass and funky drumming sliding about the place, the jam keeps a wonderful unpredictability alive for its run without slipping into aimlessness or wankery. Maybe the most impressive part of it is the sense of how well-tuned to each other's ideas the band members are, with one laying down the opener of a new tangent and the others near-immediately hooking into supporting meshes. Slips into chiller territory handled well, with the quiet mood studies bearing a goosebump-inducing intensity you wouldn't necessarily expect from an improvisational session, but there you have it. Between the slick grooves, heady psych pumps, talent show-casing, and staunch coolness, it's a little chilling to imagine that this piece of work could have remained tucked away in the band's vault. Thankfully, now that it's out in the light of day, FP69 fans have an extra piece of excellence to enjoy. And if you're new to the band, it's not a bad place to start, as long as you recognize that you're jumping into the deep end with them.
~ Gabriel 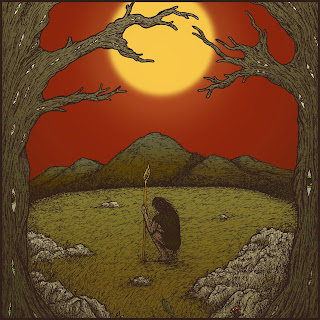 Starting off 2019 with the release of their debut EP, the Irish two-piece of Withered Fist brings three hefty tracks of melodic doom metal to bear. Starting off with the title track, they make it clear that their heaviness won't be compromised by the melodic emphasis, with instrumentalist Justin Maloney (formerly of Two Tales of Woe and Acrid Nebula) grinding on the strings of his bass until it's all too easy to imagine blood seeping from his fingers. The percussion doesn't aim for anything too fancy, but provides a perfectly suitable dirge-paced beat to the glowering atmosphere, and the strains of guitar give a slight wash of psychedelic or sludgy flavoring to the affair.
“The Dread” picks up from there, moving to a rolling beat which plays up the drums a bit more, and giving things a little more heavy rock flavor while keeping the metal aspects firmly in place. A workhorse of a main riff keeps things moving along with good fluidity, and the stylish big finish will undoubtedly make for a great live track. Lastly, “The Journey” clocks in with over ten minutes of power, riding highs and lows of energy while getting its hooks in, and showing a more tender side to the band with the work of vocalist Carl King (TtoW). It all makes for a strong debut with good repeat value, so check them out if you've been looking for some fresh heavy music that avoids easy pigeon-holing.
~ Gabriel