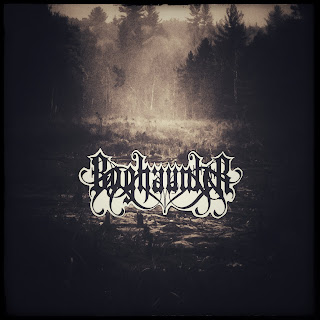 Making their debut with this two-track EP, the three-piece of Boghaunter makes up for that small number of songs in volume and length, splitting nearly half an hour between “Constellation Vows” and “Ordeals”. Lavishing a strong doom base with blackened vocals and deathly guitar-work, the band weaves back and forth between melancholy and anger, growing the presence of the main riffs and expanding the scope of their sound into a powerful swell. Careful deployment of each instrument within the songs, along with a great ear for the tone interactions, helps spice up the tunes, and for a first release, there's an impressive sense of direction and purpose to each of the tracks. Here's hoping that craftsmanship doesn't hold up a follow-up for too long, as the band gives the impression of having quite a bit more to say with their music. Check it out if you're in the mood for thoughtful doom with a harsh edge.
~ Gabriel 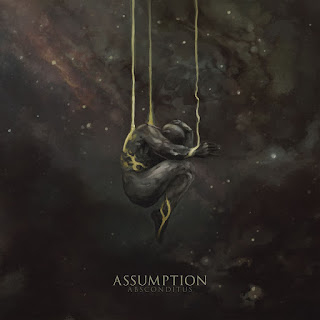 Though they've been releasing material since 2012, this year marks the first full LP to come from the Italian duo of Assumption, and with the three tracks contained in Absconditus, the band shows what they've been building in that time away from the public's ears.
Slow, heavy, and deliberate, “Liberation” opens the album to strains of guitar and tidal bass, drums providing an elephantine pulse. When the vocals arrive, they're in the form of a deep growl, delivered on that fine edge of recognizability where you can follow along if you want to focus, or just take them in on the emotive level as snarled aggression. The escalation is managed quite well through the rest of the song, and its completion comes with a transition into cold but gentle wind instruments (or at least keyboard emulations of such) as “Resurgence” begins.
Before too long, that intro section of the song gives way to harder tones, translating the form of the first track into faster speeds and hookier riffs. Again, it flows so well that it's almost a shock to hear the guitar and bass draw to a close. And as “Beholder of the Asteroid Oceans Part I & II” climbs into gear, the band's fondness for growing from an atmospheric start is once again demonstrated, this time with layered drones and slow-rippling synths. The move from there to metal action comes with a vengeance, as the duo turns out their hardest song of the LP, with spacy drifting peeking back up in the latter half. All together, it's a pretty damn impressive first album, and well worth the wait for fans of the group's previous two EPs.
~ Gabriel 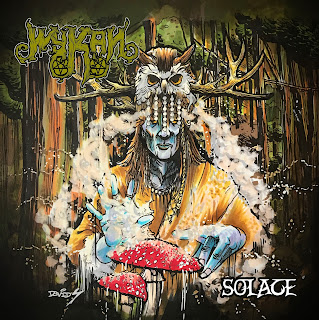 With their debut EP, this Montreal-based trio kicks things off with a mean groove, leading with “Lahppon Olmmos”, which brandishes a sample of tribal chanting before the guitar, drums, and bass drop into place. Heavy metal noodling on the guitar joins doom-worthy bass and blackened vocal grinds, while the drums bounce heavily without holding too fast to any one of the influences. Though there's plenty of energy all around, the riffs supplied by the guitarist steal the lead focus pretty handily, and despite the aggressive flavoring of the singing, there's a strong current of fun running through it.
“The Gathering” picks up after “Lahppon Olmmos” wraps up its ~7-minute run, moving to a slower pace and gentle melody, drum intensity building up to the bursting point for the metal switch. This is probably the track which most evidences band-leader Jeremy Perkins' background in black metal, with tremulous strumming, sustained passages of tension, and more naked venom than either of its EP-mates. Lastly, there's “Wykan” to serve as the EP's closer and (what with sharing the band's name) offering up something of a mission statement for the group's coming efforts. Like “The Gathering”, it moves from a slow opening to heavy intensity, and the riffs come chugging like a train loaded down with corpses. All told, it's an impressive debut, with enough hooks to catch ears wherever it gets play. So grab yourself a copy, turn it up, and consume some mean doom.
~ Gabriel

For Fans Of; Acid Bath, Jupiterian, The Munsens, Vodun, Yanomamo 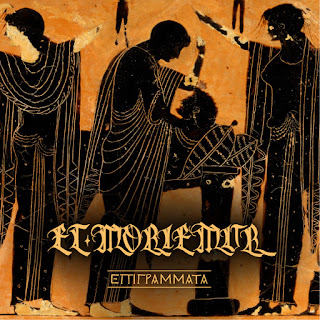 Coming four years after their last album, Epigrammata shows the Czech group of Et Moriemur performing in high form, with a blend of black, death, and doom metal furnished in elegant presentation and finesse in crafting. Piano melodies thread through bellows and sinister bass drones, choral arrangements mix with razor-ground guitar-work, and moments of tenuous serenity are regularly bashed into pieces. Good handling of tension and momentum give the songs an unnervingly focused honing of their tone, and while a few of the tracks sound a bit too similar for the good of the album, the band's care for letting individual moments have adequate room to breathe helps Epigrammata rise above a pretty large slice of their peers' efforts.
As the majority of the music operates with an ear towards atmosphere as the dominant quality, there's some paucity of memorable riffs. Luckily, the band is deft enough with their juggling of the various elements at play to keep it from growing overbearing, and the production has enough power to it to effectively serve the king-sized sound. A few sections of somber spoken-word glazing are evocative of Ulver's late-'90s material, but by and large, Et Moriemur do a fine job of establishing their own style. Check it out if big and bold doom with emphasis on mood over fuzz fits your tastes.
~ Gabriel 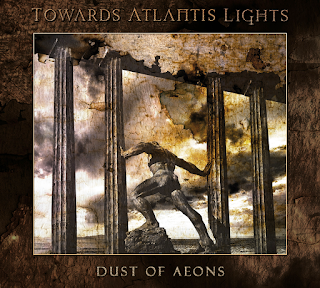 Bringing together members from an assortment of bands, including Void of Silence and Pantheist, the group of Towards Atlantis Lights make their debut with this album and its four tracks, and sound truly colossal in doing so. Hell, the opening track (“The Bunker of Life”) is half an hour long, which makes for a pretty big first impression, you know?
Naturally, the group takes its time building things up over that duration, but it's not long before the gothic guidance comes to the fore, with monastic vocal drones and resonance to put you in mind of a massive pipe organ rising up from the depths of doom. Growls and sprawling guitar riffs join the affair, packing on the heaviness and adding some welcome complexity to the proceedings. Ride along with the slow-moving power, don't spend too much time breaking down the pieces, and you're in for a doom experience to soak through your ears and into your bones.
Once they clear that monster of an opener, it's on to the second half of the album, spread out over three tracks. First of those is “Babylon's Hanging Gardens”, which concentrates the vibes from the first thirty minutes into something with a beat to which you can (slowly) head-bang. “Alexandria's Library” moves from beat to tone studies, spilling out its bass-lines at the speed of tar, coaxing out a mournful vocal treatment to give you goosebumps, and drifting out on a delicate twist of piano. That leads nicely into the final track, “Greeting Mausolus' Tomb”, with its trembling string-pluckings and clear-voiced dedication, before the swarming heat of the deeper textures take over and death holds sway.
It's quite an experience, and while it will probably put off those with a need for speed, the listeners seeking some powerful doom metal should dig it, while the funeral doom fans get chills. Set to drop on March 6th through Transcending Obscurity Records, this is one to get your ears around as soon as you can, as it'll take quite a while to fully digest.
~ Gabriel