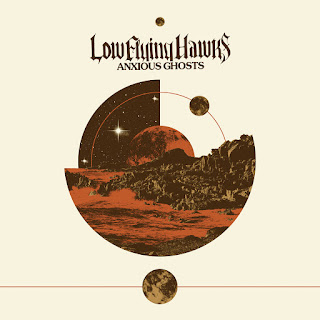 Following up on their two existing albums after a year away, the duo of Low Flying Hawks deliver five songs on this EP, leading with the grimy and down-cast blues of “Night Flight”. Taking about two minutes to paint a picture with acoustic strings, somber voices, and incidental noises, the band makes a turn into similar but distinct territory with the follow-up track “Somewhere (Part 1)”. Branching out into more of a desert rock vibe, the pair take their time to thoroughly establish the atmosphere and a backing beat before bringing in any words. Despite the low-key nature, there's a palpable feel of rising tension, from the abrupt twangs of the guitar to background tones and increasing weight on the drum-hits.
It's essentially a five-minute preamble, leading directly into “Somewhere (Part 2)”, which rides the elevated intensity right into a crash of bass and firmly fuzzy stoner rock grooving. Building, reinforcing, and diving into the main riff makes up most of this song's nearly eight-minute run, and I expect it'll be the high point for a lot of listeners. Having set that benchmark on the EP, though, the band goes even harder with the next tune, “Hollow Grasp”, bringing a harsher edge to the guitar work and vocals while maintaining the bleary fuzz miasma. Some slick echo effects applied to the singing make things even more disorienting, as does the tail-end switch back to the gentleness of the EP's opener. That change-up flows pretty smoothly into the last of the songs, “Doors to Nowhere”, which builds from an early stoner/desert rock groover into a heated and rambunctious blazerr, before easing itself out onto a cloud of static.
As much fun as the individual songs are, it's maybe even more enjoyable for the way the band maps out the rise and drop of energy over the EP. In any event, it's a cool experience with lots of little details to savor, and vinyl copies are going fast. Take half an hour to check it out, and see how it grabs you.
~ Gabriel 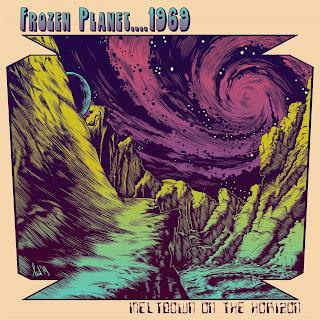 Coming less than half a year after the 'bonus track' EP of The Mystery Wheel, FP69's latest album shows the Australian three-piece rolling right along in high spirits and strong form. Popping off from the start with a 22-minute heavy psych monster jam (“Rollback”), the band cruises through mazes of reverb and mile-deep grooves, guided by clear-toned guitar noodling and propelled by Frank Attard's excellent work on the drums. Things are kept trippy and fun, the riffs are so thick you can practically sink your teeth into them, and the energy makes the third of an hour just fly by before you know it.
Slipping neatly into “Bellhop Shindig”, FP69 let loose with more intensity and distortion in their rocking. While the improvisational qualities are still evident, throttling back to about a third of the opening song's length leads to a more focused ride, with the circling around the main riff creating an almost centrifugal compulsion. Flowing from there to the more laid-back, bluesy “Dandy Chai”, the album builds a sense of moving from near-chaos into more orderly arrangement, all while teasing a potential return to the rambunctious.
And with closing track “Sunset Variations”, which runs a quarter-hour by itself, that nuttiness does indeed rear its head back up. Keeping up the mellow vibes of “Dandy Chai” for the initial segment, more and more psych wildness seeps in as the song progresses. A midway fade-out doubles as a fake-out before the band rides back in on a tear of guitar, and grooves their hearts out until the eventual end. For fans of FP69, it's a sweet treat, delivering almost an hour of in-the-zone action. Those new to the group may want to start with something offering more easily digestible serving sizes, though, at least until they get a sense of how the stuff goes down. Either way, it's another chunk of excellent work from this always-reliable crew, so if you want a physical copy, you'll need to act now.
~ Gabriel 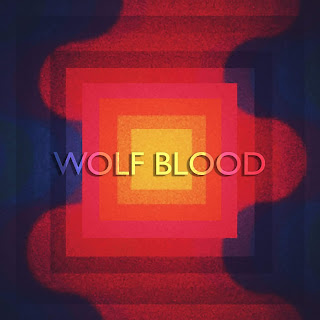 It was five years ago that Wolf Blood let loose their self-titled debut album, and with pressing after pressing selling their full runs (including the vinyl from Roadburn Fest-hosting Burning World Records), it seemed like the band's momentum was picking up just like one of their riff-digging tunes. As they focused on live shows and a variety of rare merch (count yourself damn lucky if you've got one of the lightning bolts and Petrian cross shirts in your collection), it was up to the six songs of the S/T to keep the torch burning for those outside of WB's tour radius. Thankfully, the wide range of flavors and styles packed into the album made that a working solution.
Now the four-piece is back, having replaced their bassist with one who also does guitar and vocals, and offering up another six tracks of heavy, grimy metal. Opening up the new album with “Lesion”, the band lays down an icebreaker of a hard beat before swinging in the vocals, riding back to the beat, and then drifting off into looser riff exploration. The composition quickly establishes that a lot of the musical character from the first album is still present in force, and that the new bassist slots right in to the action. “Slaughterhouse” continues the fun by further blurring out the style boundaries, bringing together stoner rock, hard metal, and a bit of psych, while letting the focus center on the energy and flow. With the last track of the A-side, “Kumate”, they roll up another twisting ride, with drummer Jakob getting some spotlighting as he trades bashing flourishes with the guitars' snarls. The largely instrumental nature of the song makes for a cool way of recentering listeners, while the deeper psych journey of the song's latter half does solid work in drawing them back into the bumping groove.
Side B's “Opium” picks right up from there with still another hooky spine of a riff, alternating between tranced-out intonations and threatening growls on the vocal side. Moving quick (at two minutes and change) and hitting hard, it soon gives way to the more meditative “Story of a Drowning Man”, which brings probably the slowest drawls from the bass and guitars to be found on the album, while Jakob matches it with measured pace. Here is also where some of the most exposed emotional power comes through, with considerably less bluster and fury obscuring the singing, which moves to a reflective quietness. Things build in intensity, as you might expect, and as the main riffs strengthen their chording and volume, it's only a matter of time before the anger resurfaces, which it does in high style.
“Tsunami”, which you might have heard on last year's single to build hype for WB's return (along with non-album track “Home”), closes out the album with a tour through the assorted elements and inclinations preceding. Big, compelling riffs, contrasted with high-focus brooding and vocal alternation, do the title justice with the surge and ebbs they bring, while the finish is downright devastating.
An album to soak up the nuances of over numerous listening sessions, II shows that there's still plenty of fire in Wolf Blood's veins, and complements the debut with a number of intriguing adjustments to the baseline sound. Though there's not really any immediate howl along choruses like “Dancing on your grave!”, the confidence and skill of the band comes through with no obscuring. Vinyl's limited to 250 copies, tapes to 100, so if you want a physical instance of the album, you'd better act fast. More tour dates are already lined up, so hit those if you can, and keep ready for more to come from this crew.
~ Gabriel 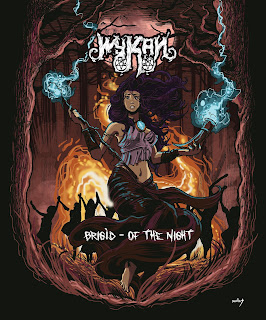 About a year ago, we had our first encounter with the Canadian group of Wykan, through their debut EP, Solace. Though the band has since replaced their drummer and bassist (now operating with Dug Kawliss and Corey Thomas in those respective positions), their take on blackened doom with a slight twist of psych rock has been maintained and refined. Holding off on the harsher elements until the engagingly sparse melody which opens the first track (“Imbolc (The Cleansing)”) has pulled listeners thoroughly into its groove, the band shows a deeper care for how the energy of the songs works to the EP's structuring, and it's just one of the aspects which demonstrates not just polish, but fundamental improvement.
When the gurgling vocals from Barrie Butler kick in, they're underscored by a gnarly but clean-toned guitar presence, a dynamic held for most of the EP, serving up both contrast and some interestingly frictional harmonies. Established melodies are revisited with increased intensity, and in the space of just one (seven-minute) song, Wykan show how much work they've put into their song-writing in the intervening year. A smooth flow into song two, “Breo Saighead (Triple Goddess)”, marks yet another fine touch, with the rise in venomous attitude feeling like a natural progression, and the shifts in riffs are done without sacrificing any of the momentum.
Last of the Celtic-themed tunes is “Reul-Luil Bride (Star of Brigid)”, with guest drummer Simon McKay of The Agonist getting some spotlighting as he slides his compelling percussion work all about the drum-kit. Some more sweet riffing guides listeners out into the sounds of a forest fire, and then things are over. Production, performance, and composition are all done superbly throughout the EP, and the songs are captivating without feeling overwrought. Well worth checking out, this'll be available through Wykan's BandCamp on a pay-what-you-want basis, so there's no excuse for not giving it a twenty-minute test run.
~ Gabriel

For Fans Of; Centipede, The Sleer, Trees, Trinacria, War Iron