On September 4th, Sumokem released Prajnaparadha. Following their 2015 debut The Madness of Lu Shen Ti, Vol. 1, and 2017's The Guardian of Yosemite, the new release finds the Little Rock-based band shifting their musical approach once again, but also turns out to be something of a larger turning point for the group.  We spoke with Sumokem about their history, the making of the new album, and what they see in their future. 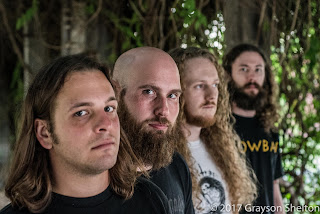 The Burning Beard: Hi there, congratulations on the new album, and thanks very much for sharing some of your time with us. To start with, could you give new listeners a run-down on the band's current line-up?

Sumokem: Yeah, so it's always been myself, Jacob Sawrie, on vocals and rhythm guitar, and Drew Skarda on drums. Since 2015 we've had Tyler Weaver on lead guitar and Dustin Weddle on bass. Now myself and Dustin play synths, as well, on every song on the new album, actually.

TBB: Who was in the band's original line-up, and how did it come together?

Sumokem: Originally it was myself, Drew, and Josh Ingram on lead guitar. We played for a few months with no bassist, and I'm surprised people liked it, haha. We were fortunate enough to add local legend Alan Wells on bass, and that was SMKM for the first couple of years. We recorded our first EP in Alan's basement. Josh died in May of 2015, and Alan left at the same time to take care of his family and his health. Tyler and Dustin came in and we found some new life.

TBB: How did the writing and recording of Prajnaparadha differ from your previous albums?

Sumokem: Really the only thing that was different about the process was that everyone incorporated riffs. It really opened things up and made this album what it is. We also took things a little more seriously in the studio, and that definitely made a difference.

TBB: What were some notable inspirations for its themes, and what led the band to settle on the final overall concept for the album?

Sumokem: This album is definitely a reflection of the four of us and our separate tastes shining through and meeting in the middle somewhere. We were all able to contribute to the writing process on this one since we’ve settled into the lineup, so I think that’s a reason it sounds much different. Our drummer, Drew, even wrote quite a few guitar riffs for this one.

TBB: Were the songs mostly put together before the concept was decided, or did the concept come first and direct the song-writing?

Sumokem: Honestly, my stories kind of write themselves. I start with a time and place, do a lot of research, write an outline of the story, and go from there - but as soon as I learned the word "Prajnaparadha," I knew that "sins against wisdom" had to be the theme.

TBB: Were there any other memorable ideas on which direction to go with this album?

Sumokem: The concept for the albums, and the lyrics, have always existed before the music, per record. We've just always kind of written the songs based on what we feel from the lyrics - but this is the last album we'll write that way, at least for a while.

We wanted this album to be our most progressive, most dynamic album yet, but let things play out naturally, and it worked out.

TBB: If there is one, what's the usual process for Sumokem to build a song?

Sumokem: The writing process was pretty organic, we brought riffs in and arranged them together and somehow it all worked out without sounding too juxtaposed or odd.

TBB: Given Sumokem's tendency to change atmospheres or presentation with each album (Chinese vibes for Lu Shen Ti, First Peoples for Yosemite, and Indian for this one), are there any influences on the band which you feel have stuck around from the start?

Sumokem: The only real influence that has stuck around is the use of cannabis or other psychoactive drugs in ancient cultures; be it for a character's benefit, or to their detriment, as in the new album.

TBB: If it wouldn't be giving away too much, does the band have any thoughts on which culture the next album might visit?

Sumokem: Actually, this is the last we'll be doing the "concept album" thing, at least for a while. We have started writing for another EP that is going to go in a more philosophical direction, lyrically.

TBB: What are some of the challenges you've faced as a metal band in/from Arkansas?

Sumokem: It's hard to say we have struggles any different than bands from anywhere else. You could say that the Little Rock/Arkansas scene is more underground than other major cities, but with bands like Rwake, Deadbird, Pallbearer, and Terminal Nation bringing attention to it, we can't really complain. It's a slow burn at worst.

It has its ups and downs being from a small city, we luckily have a history of killer bands here. It’s also harder it seems to get attention outside of Arkansas sometimes, but locally the reception here has always been great and we are grateful for it.

TBB: Are there any bands with whom you've shared a stage that you feel have helped sharpen your sense of who you are as a band?

Sumokem: Ha! Most of them. We've gotten to play with so many bands we admire, or even worship. We couldn't list all the bands we've played with that showed us how much better we could be. I think the biggest blessing was spending a week on the road with our friends in Pallbearer and Spotlights. Seeing them just kill it every single night was truly inspiring.

TBB: Are there any current bands with whom you'd be especially interested in putting out a split, or otherwise collaborating?

Sumokem: There's also a ton of bands we'd love to collaborate with. Personally, I'd love to do something with Pinkish Black or Kayo Dot, but we've also thought (if in passing) that an ultra-Arkansas collab could be cool.

Sumokem: Hey, we just hope people like the record - and a lot of people deserve a lot of thanks. We hope to see people on the road sooner than later.