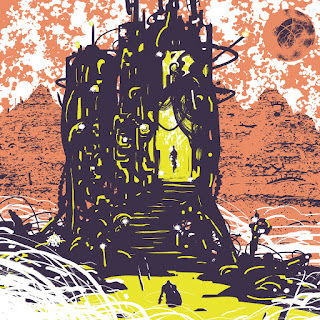 Following up on the 2016 release of Projections I, with a live album sandwiched between, Headless Kross have popped back up to deliver the second installment. As with the first one, they bring four tracks to bear, each of them hovering around the ten-minute mark, and their fusion of heaviness and melodic emphasis (as we encountered on their Volumes album, back in 2015) is still solid as hell.
“Signed in Blood” is the first of the tracks, and it bursts into action with harsh yells and a riff that feels like it's looking for a fight. The drums lean into that vibe, punctuating measure round-outs with battering beats, and once the initial volley of aggression has been launched, the song settles into a slower groove while holding onto that opening roughness. The tone and fuzz are quite tasty, with the bass' reverb looming out over the higher-register components, and the almost scratchy timbre of the guitar gives its spidery chords a bit of spine-tingling eeriness.
“One Hundred and Forty Four Mirrors” shakes up the flavor with some warbling flange on the bass, a shifty, near-jittery rhythm from the drums, and some striking soloing from the guitar. The vocals still feel like they're being punched out of the singer, but they make it work with the overall oppressive atmosphere, and once they settle into the main groove, they ride it hard to the finish. “Falls the Shadow” leads into the B-side, spotlighting some cool rhythm alternation between guitar and drums before shifting into more of a heavy grind mode. There's some enjoyable progressions, especially in their outro change-ups, and they give off the impression of this being one that can really lead to some fun experimentation in live sets.
Lastly, “The Obstacles Becomes the Path” takes listeners on an exploratory groove dive, feeling something like a structured jam session for much of its run. About halfway through, though, they tighten it up for a ramping up of tempo and intensity, pushing the central riff on until hitting the finishing disintegration. There's plenty of heaviness to let wash over you on this album, and once the riffs get planted in your head, it's a serious challenge to uproot them. So if you've been looking for some anger-soaked doom to round out your year, Headless Kross have got you covered.
~ Gabriel 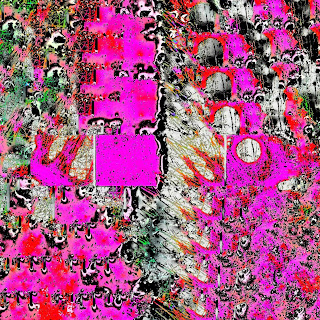 Around this time last year, we got our first taste of the music made by the Danish group called Sonic Moon, and with its grungy twist on heavy rock, we definitely dug what we heard. Now they're back with their second EP, packing five tracks of further exploration into their character and ideas.
Leading with “All Things Evergreen”, which cycles through some warm-up noise before throwing its weight behind a big, bossy riff. Vocalist Oliver Lyngkilde slides his way into the song right on the back of that riff, and from there, the song builds up a groove-working punchiness, with some kicking bassy break-downs on the bridges. “Keep Bleeding” picks up from there with a more withdrawn and hurt vibe to Lyngskilde's singing, though the instruments build up from a matching quietness into a roar that pulls him up with it. “Epitaph”, fittingly, returns to the more somber sound for its start, and while the band can't entirely escape their energetic inclinations, it does show their serious side in a good light.
“Vultures Beak” (sic) flows right out of the last notes of “Epitaph”, picking away on the base melody while gradually regaining speed, finishing out on a bit of flange flash. Lastly, the title track comes in to set a slow grind rhythm and riffage, drawing listeners into a head-bob until the end.
The grunge flavoring is still there, in the toothy grit of the guitar tone and the tendency to set riffs, then repeat them at intensified heaviness and dirtiness, but the songs have, overall, taken on more of a doomy flavor than was evidenced on the first EP. “Keep Bleeding” and “Epitaph”, as their names suggest, are probably the best examples of this, but they also demonstrate the band's facility in meshing that heaviness with rock, and coming out with something distinct from standard heavy rock. There's more emotionality, inventiveness, and boundary-pushing to it, and it's a clear confirmation that Sonic Moon have been keeping busy since their first EP's release. There's development, but clear continuity of character, and hearing them grow is a treat. Hopefully it won't be too long before they put out an LP, so we can see them push things even further.
~ Gabriel

For Fans Of; Alice in Chains, Deadeye Dick, For Love Not Lisa, Pale Grey Lore, Seed