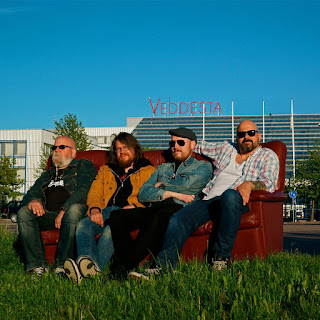 Van rock typically melts amp tubes via California, where the sand meets the sea and the West Coast gave birth to hot rods and skateboards.  When giving Ponamero Sundown a listen, your first instinct tells you these guys are definitely from the Left Coast, U.S.A.  The fuzz pedals and wah-wahs are fully engaged to the max; this has to be straight out of Southern Cali, right?
Wrong.
Ponamero Sundown calls Stockholm, Sweden, home and has blended their own version of good-time heavy rock, inspired by sounds of the '70s combined with a modern stoner twist.  The opening cowbell of “Bottom of the River” might as well serve as the ignition for the freeburn to follow.  With the first few notes of the track, it doesn’t take long to realize you’re in for a ride. Anders Martinsgård, on guitar, and Robert Trisches, on bass, get down to business quickly with plenty of riffs and tight licks in their pockets.  Trisches’ bass channels the best of John Entwistle at times, with hints of Tatsu Mikami.  In the meantime, Niclas Engwall brings pipes that are plenty strong to keep the ride moving.
Behind it all is the unforgiving drumming of Peter Eklund.  The man is a fill-master, laying down one perfect roll and cannon beat after another.  The drums on this album are some of the best I’ve heard in years.
Named after an industrial area in northern Stockholm, Veddesta has been Ponamero Sundown’s home base for years, where the album was written, and where it was primarily recorded, according to the band.  This is a heavy dosage of maximum fuzzed-out rock and roll that keeps the party flowing like a well-waxed boogie van making the Saturday night scene.
Ponamero Sundown never fall into the trap of overplaying or self indulgence.  They bang it out and move along.  Veddesta and all the burnage from Ponamero Sundown’s fuzz flavor is available now via Transubstans Records, with a vinyl release set for December 11.
~ Andy