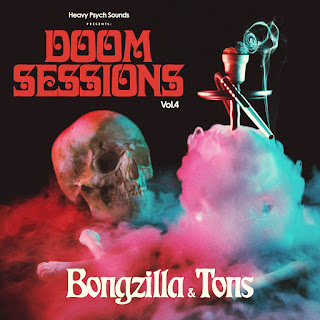 Continuing a steady pace for their split albums in this series, this is the second Doom Sessions release from Heavy Psych Sounds this year. Bringing together the long-running Bongzilla with the Italian group Tons, this installment

The elder of the two bands gets the A-side, and Bongzilla leads with “Mother Flowers Little Helper”, and despite seeming a bit word salad, it makes a big impression. Plugging along on a main riff that does enough work for a stretch of nine and a half minutes, spiced with groaning vocals, hard beats, and a fair amount of high-hat clanging, the tune is a heaping helping of opener to get listeners in the stoner doom mood. “Cosmic Distillate, Nectar Collector” follows, picking up the pace (relatively speaking) with a hooky pull from guitarist Jeff Schultz. Some chuggy breakdown adds to the fun, gaining enough momentum to build a slow-swinging rhythm up and into the exit. “Cupcake” (I'm gonna go out on a limb and say it's an ode to an edible) takes a similar tack, but brings in more feedback, spiking things up as the sludge gets consumptive, eventually crawling the tempo down to a seething end.

Tons' side is a single track split into three parts: “Chronic Morning Obesity”. As dismally heavy-sounding as the title suggests, the quartet gets down to semi-psychedelic sludginess, raw vocals and crunching chords complemented by the concessions to harmony which perk up the music. Highly in tune with the style of Bongzilla's contributions, the band thunders along in swampy style, crashing and crushing. A low-mixed sample of someone rambling through a list of all the food they want to cure their munchie cravings shows up in the last slice, making for an entertaining shaping of the mostly-instrumental grooves.

Both sides fit together extremely well, so if you've been in the mood for some fresh and dirty stoner doom, all splashed up with sludgy tendencies, then this double serving is right up your alley. The split officially releases April 23rd, but pre-sales are already up, and going fast, with an assortment of colorways for the vinyl. Cheers to HPS for another winner. 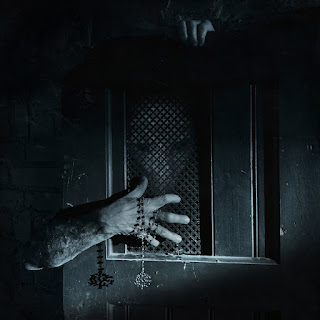 Following up on their single by the same name from earlier this year, the Finnish sextet of Planeetta 9 bring a concept EP to life across four tracks. Blending doom metal, rock, and folk music, the group delivers an undeniably distinctive style, and shows how deep the well of ideas they drew from in concocting these songs is.

The title track is the first of the four, working some tight-knit grooves with twisting rhythmic arrangements, earthy vocals, and a rich diversity to the instrumentation. The breakdowns are inventive with their heaviness, the switch-ups in band-member focus feel like natural flows to the song, and the escalating intensity is handled to very nice effect. A bit of guitar soloing, paired with deep-beat drums, gives the unpredictable path of the song a helpful anchor, and an extra hook to fix it in memory. Track two, “Sama hauta”, opens with a more traditional doom metal riff, bringing Saint Vitus, Candlemass, or Below to mind with the dramatically-delivered vocals alongside the melancholy string tones. The band hits a fine line between weight and melody in the mood, with the nimble handling of shifts and augmentations casting them in excellent light.

“Juoksuhiekka”, the third in the run, brings the somber tones used in the preceding songs to fuller life, employing bowed instruments and piano, along with a hushed vocal presence, to thoroughly evoke a regretful ache. Easily the most withdrawn of the EP's songs, it encourages a bit of introspection before “Vakuumilapset” leaps the energy back up. Returning the electric guitars and cymbals to the fore, this closing piece finds the band luxuriating in winding chord progressions, rich tones, and plenty of reverb. A frenzied crescendo ridden right into another one lets the band exit the EP with flying colors. Each of the songs has so much going on, and with such fine technique, that despite the four-song length, this is one that can easily be relistened to time and time again while still finding new details.