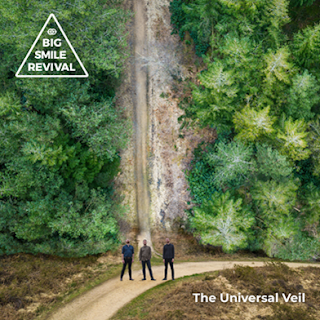 Coming at us from the Bristol region of the UK with this, their debut EP, the trio of Big Smile Revival balance retro psych rock leanings with some more modern rock rough 'n' tumble looseness.

Lead track “Sacred Mushroom” lays in a choice sample before sliding into a warm groove, which finds its way into bigger, faster, and rowdier forms as the group gets down with it. Staying instrumental, they keep the focus on the tones, rhythms, and interplay, and turn out a high-charged piece of cool exploration as a result. As the move into “Divided Kind”, a bit of a twist on pub rock rhythms sneaks its way in, spiked with enough grungy attitude to turn it on its ear. This song also brings in the vocals, which merge with the grumbly fuzz to great effect, dipping into and rising out of it as the harmony keeps moving. A tasty guitar solo gives it that much more kick, and keeps the energy up as the EP moves to its second half.

“Amhran Siog (Fairy Song)” gives a big nod to the group's regional roots, and while there is some starry-eyed folksiness to the acoustic guitar lead-in, and accompanying lightness of the vocals, BSR tap back into the straight-out rock before they lose momentum. That play with contrasts fuels the rest of the song, with the band taking alternating scoops from each, and the clearer sections put a bigger spotlight on the band's lyrical facility. Closing things out, “The Helm” indulges in some tonal lushness, riding the listener in on echoing guitar chords, with the same effect giving the vocals a spacy vibe. There's a wistful quality to the playing on this last track, pushing the band's emotional position out from the mass of the EP's rock-out approach. It's a nice show of their range, and the slowed tempo is given enough change-up in the breaks to keep it from turning into a closing lullaby. All together, great work from this group on their first outing, and enough quality across the songs to have me eagerly awaiting their next release. 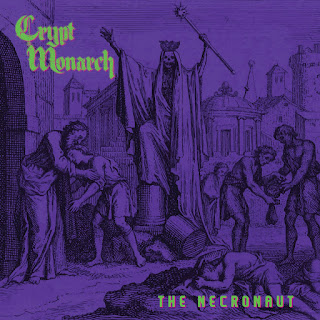 Hailing from Costa Rica, the power trio of Crypt Monarch are making their debut with this three-song, thirty-six-minute album, recorded (according to the liner notes) “live in a cabin in the woods.” Thanks to their name and some woodcut cover art (especially that fine shade of purple), they've got a good sense of character from the start. That's especially welcome, since for the most part, the vocals aren't the focus on this album.

The evocatively titled “Morning Star Through Skull” opens things up, leaning into some heavy, hard-landing beats and long-sustain riffs to build up an atmosphere of rumbling aggression. As the song plays on, the violent aspects get more life, from bellowing vocals to fuller body on the guitar's ringing chords, and while the finishing moments don't quite pull out a solid conclusion, it still has enough appreciable moments before then to have stoner doom fans nodding along.  “Rex Meridionalis” (your guess is as good as mine on the meaning; 'King of the middle,' maybe?) picks up in a similar style once “Morning Star Through Skull” winds to a close. Once it hits its stride, though, it brings in some winding riffage alongside some metallic percussion for a nicely creepy serpentine vibe. As they lay in some heavy distortion and lean further into the riff, the rhythms hit fantastically, making for a real dark groove tune.

“Aglaophotis” keeps up the mystery titling, and finds the band taking more of a fuzz feedback tone for the guitar, feeling a bit like a lost B-side from Come... My Fanatics, at least instrumentally. The vocals get pushed way down in the mix, leaving the yells as muffled periphery. A late-song shift into more melodic focus helps put a nice capper on the album, with the circling low notes feeling like a sliding comedown. Throw in a distorted sample at the very end, and what you've got is a confident, well-realized album of deep-submersion stoner doom. Sure, there are rough spots here and there, and the length of the songs leads to some filler, but for the first album from the group, and one that was recorded live, it's more than satisfactory. Check this one out if you wish Demon Head had continued more in the vein of their original demo. 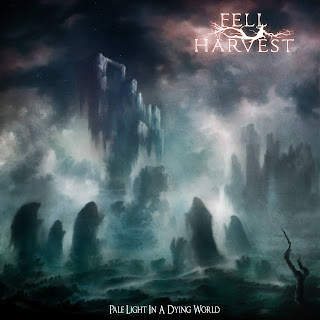 Following up on their self-titled EP from last year, the power trio of Fell Harvest have made their return with a solid forty minutes of forceful doom metal. Peppering in a little bit of spoken word samples here and there, the main focus remains firmly on the strength of the instruments' impact, moods that lean more towards rage than sorrow, and pressing ever onwards.

With “Titanicide”, the opening track, the band sets a powerful first foot forward. Pounding percussion, strident vocals, and insistent strings come together in punchy chords and hooky riff arrangements. Some sharp guitar work gives those hooks all the more ability to lodge in the back of your brain, and the speed with which the band rams through their ideas makes the four-minutes-and-change practically zoom past. As the title track follows up on that initial salvo, expanding into an eight-minute rambler, the band finds more room for slow melodic focus. It should be noted that, in spite of the song names, there's fairly few moments of sorrowful calm to be found in the album; funeral doom, this is not. But the times when it does arrive (as with the extended bridge in the title track) are well-used, making the inevitable returns to thunderous pummeling feel more impactful.

Thankfully, the interplay of the band members is reliably interesting and inventive, shifting focus around the trio's talents to strong effect, and keeping the songs feeling that much more vitalized as a result. In particular, when they unite around a main driving riff, things really kick into gear (see “The Lark at Morning” for a strong example). Similarly, when they give attention to grinding down a particular rhythm (as in “Thy Barren Fields”), the results are some of the album's heaviest. All in all, it's a very strong album from the band, and one with enough twists in the compositions to reward return visits. Here's hoping that their next album finds a little more time to spend in the melodics and sorrow, though.

For Fans Of; Candlemass, The Fateful Hour, Heavydeath, Opeth, Pilgrim 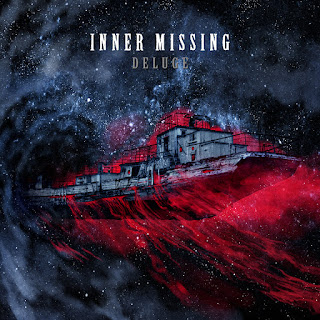 On their first album since clearing the one-decade anniversary of their first release, the Russian group of Inner Missing have put together eight tracks of gothic doom metal, blending melancholic reflections with powerful rhythmic work and aching tones from their strings.

“In the Haze” gets things off to a strong start, showcasing the band's skill with nimbly sliding from one exploratory movement to the next, carrying listeners along through rousing action and somber focus. While that lush songwriting style persists throughout the album, as does the general mood of regretful introspection, the band has clearly taken pains to distinguish the tracks, to excellent effect. From the broad-buzzing guitar timbre affected for “Daybreak”, to the hard riffing of “Locusts” and the staggered beats of the title track, the songs find ways both immediate and more subtle to stand apart while cohering to a recognizably persistent musical personality.

The work put in by drummer Dmitry Kim deserve special mention, as it does a fantastic job of shaping the emotion and energy of the songs, even when just providing a backbeat to more elaborate guitar tonality. The band plays wonderfully together, building off of each other's heat to reach some blow-away crescendos, and accenting the more emotive parts of the songs without getting treacly. Ultimately, it's an excellently crafted set of songs, and one from which fans of textured, heartfelt doom will get plenty of enjoyment.

For Fans Of; Below, Devastating Light, Earthling, Heavydeath, Pilgrim