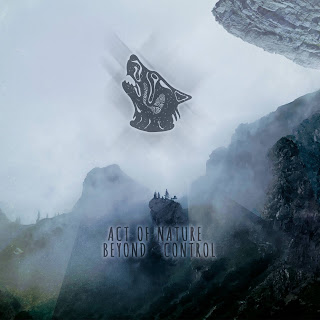 Coming to us from the cultural hub of Vienna, this is the third release from Caged Wolves, following their back-to-back studio and live EPs in 2019. This time around, the band brings three songs to the table, each settling in the eight to ten minute range, working a mix of desert rock, doom metal, and alternative approaches to each.

First of the tunes is “Cosmic Rage”, which kicks off on a psychedelic groove with some phasing guitar over heavy rolling drums. Settling into a slow-moving but powerful groove which hangs around for much of the song's remainder, the band counterpoints it with bursts of glowering energy, punching up the vocals right alongside the strings and drums. The vocalist is gracious enough to bow out for a stretch, letting the listener soak in some instrumental interactions as they gradually build to a crescendo, leading to a real banger of a climax. “Chronos” follows, leading with an interesting intro finger-picking and rim percussion before sliding to an almost wistful arrangement. They put the high-energy bursts of the opening track to work again here, but raise the time spent in those outbursts each time, making for a cool study in alternation of their intensity. Thankfully, there's enough emotion put into the slower portions that they don't lose the thread, though the momentum does get stretched pretty far. Again, the climax delivers on the build-up, and the band shows some striking chemistry in the way they riff off of each other in this one's release.

Lastly, “Through the Rainbow Valley” introduces itself by pulling out a blanket of fuzz for the strings, which, along with the fatness of the ensuing riffs, shifts things deep into Kyuss territory. As the band shifts their way back out along the course of the song, the psychedelic and prog elements get turned way up, culminating in a fantastically shagged-out roar. Oh, and then you get all three songs again, in instrumental form. The persistent quality of the songs is a testament to the work that this crew has been putting in since their last releases, and it certainly pays off nicely. Great song-writing and powerful playing, well worth checking out for anyone in the mood for something with some heavy music to take them away for a while.