Up Cancer Creek Without A Paddle... 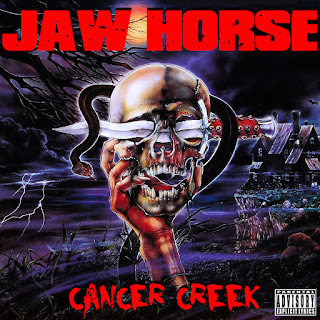 Jovi from the band hit me up with this little gem while I was away and after seeing the artwork I was itching to get home and download the thing and give it a listen. Shallow thinking I know, but dammit, if your band rocks artwork reminiscent of all the best horror films covers of my childhood then you've won a good 90% of my appreciation straight off the bat.
That being said, I'm gonna cop out a little here and give you the low down on the band in their own words. Mainly because they've done a damn good job of it but partly because I'm pretty well oiled with Jim Beam.


Jaw Horse is a blues based, stoner rock and roll band from Central Pennsylvania that became a fully formed entity in the summer of 2011. The influence of our band is the entire history of rock and roll, anything from the great delta bluesmen to Chuck Berry, MC5, Thin Lizzy, Motorhead, or The Misfits all mixed in together and played with the aggression of Orange Goblin, Corrosion Of Conformity, or Scissorfight.
We take these influences and wipe the bar with them, they are torn apart with broken bottles and let to sit and soak up the stale beer and blood until they are comparable with nothing. It's just Jaw Horse.
We play shows for anyone who'll have us. We've drank bars dry with the heaviest metal dudes you've ever met, we've stood our ground and gone toe to toe with hardcore's toughest guys, we've gotten a room full of doom motherfuckers moving their feet and yelling "Fuck yeah", we've gotten the shit kicked out of us by a house full of vagrant punks who couldn't get enough, and we've taken trips and murdered power supplies with hundreds of pseudo hippies out in the middle of the woods. We smash our way through the best shows, and talk shit through the bad ones until we piss them off enough to get some kind of reaction. No matter what we leave a mark and always get invited back.

This album was recorded in spurts from the time before we'd even played our first show up until just a few months ago. It runs the gamut of a band figuring shit out with a fresh take on stoner rock to the full on "fuck you, this is how we do it and you're gonna like it" that is becoming Jaw Horse's trademark.

We've already got songs ready for a split we're getting started with one of the righteous bands we've met along the way over the past year, so now is the time to get our full length, so you can say you were hip to us back then.

That pretty much hits the nail on the head I reckon. It's like an angry, booze fuelled, punk inspired, metalfest recorded by Hell's Angels. The guys manage to pull of a staggering array of catchy guitar licks while all the time maintaining a solid old school punk demeanor. But it doesn't end there. The guys claim a wide spectrum of influences, and prior to listening you may well call bull on a few of them. But credit where credits due, all those bands listed are totally spot on, especially with tracks like Feels Like Zero which kicked off with a really distinct late 50's rock n roll feel before evolving into a an early Thin Lizzy sound while all the time maintaining that aforementioned punk ethos.
If you've a fan of any of the bands mentioned you're really gonna like Jaw Horse. But if you've dabbled with most/all of those mentioned and have a good appreciation for all things rock n roll and its off shoots, then you'll more than likely think this album's the mutts nuts. What's more, it's only $3!... C'mon, you know thats a damn good purchase!

For Fans Of; The Misfits, Scissorfight, Turbonegro, Viking Skull, Dukes Of Nothing

Baked In The Shade... 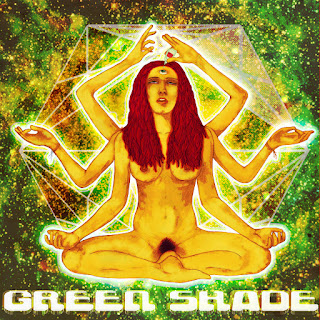 What better way to (belatedly) start the new year and kick off the blog than with some tripped out weed induced psych? Well thanks to four bong wielding Croatians, we can do just that.
Wholly DIY, low budget, and consisting of an odd element that reminds me of some early 90's grunge that I cant quite put my finger on, Green Shade actually manage to really belt out a real corker of an EP with this homemade release. Yeah, that may initially sound a bit condescending  but when you think stoner psych, you dont immediately think; "Ah! Croatia!" do you? So straight from the opening of the brilliantly named 'Sunshine Of Your Leaf', when you're met with a fade in of a fusion of 60's psych and 90's desert rock riffage you're hair is immediately blown back. What's more, it actually stays blown back too as the forthcoming 25 minutes duck and dive through a hazy collaboration of all the best drug inspired genres of the last 40 plus decades. Peaking with immensely catchy, foot stompin' riffs and bringing you back down to earth with somber spaced out drum and bass heavy ambiance, this truly is one of those hidden little gems of a stoner album that can easily go blow for blow with any other established act of the same ilk that you could care to mention. No bad going for being the meer byproduct of four guy's long boring 2012 summer. Hell, if thats their formula, I really hope nothing exciting happens for them in 2013 because I'd kill to hear a follow up to this little beauty!


For Fans Of; Nebula, Dozer, Wo Fat, Mars Red Sky, Ivy Garden Of The Desert 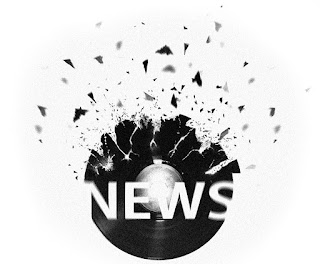 We're back! Well, I'm back at least. Hope y'all had a good drunk fuelled holiday. Just a quick apologie for the hiatus. I did have plans to keep the blog running while I was over the oposite side of the world, but they all fell through. I am slowly getting back to all the bands who have contacted me over the last 4 weeks, there are an absolute ton of which, so please bare with me. If you did email me, don't worry you will be up here soon, I'm just getting to everyone in the order in which I received them. The first entry of the year goes up on Monday 28th, so check back then. In the mean time here's a few little wax releases you may be interested in...