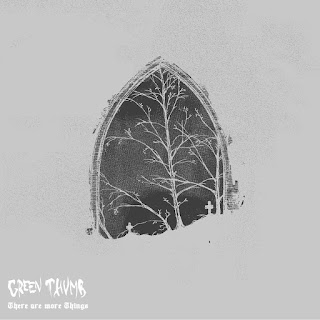 Following up their 2018 debut West with this, their second EP, the Italian group of Greenthumb roll out three solid tracks of psych-tinged stoner doom, with aching vocals and rumbling riffs. Though the production and mixing are kind of rough, the vibes come through with good power, and while I personally dig the slower song sections a bit more, the ramps up into battering action show the band performing just as well in that mode. The vocals are a highlight, with the keening sense of longing and pain meshing wonderfully into the distant and wind-blown feel of the singing. At just over twenty minutes, there's enough here to give you a good sense of the band's style, while also holding enough back to build appetite for more. As they've already managed to put out two EPs in the space of one year, it's a fair bet that we'll be hearing a full album from them before too much longer, so go ahead and get a taste of this Italian doom group's flavors.
~ Gabriel

For Fans Of; Below, Eternal Candle, Humbaba, Mist, Windhand

Stirrings From The Underground... 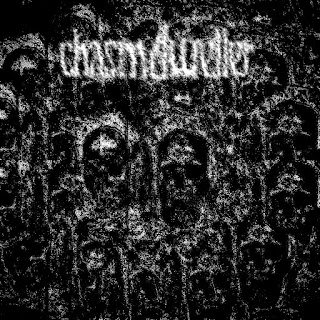 On this, their first release, Chasmdweller offer up two lengthy tracks of death-flavored atmospheric doom, leading with “Plague Monument”, a slow-crushing roller with breaks into rampages sourced from the death metal side of its heritage. Boggy reverb and cave-like acoustics add to the dungeon vibe, as do the intentionally muffled vocals. Touches of electronic texturing further it even more, while also providing solid intro and outro coverage, and the murkiness of it all is spun together with a good ear for how to combine flavor with big riffs and healthy momentum.
The second half, “Clotting of the Sacred Artery”, pulls a synth intro as well, but develops into a paganistic tambourine-and-drones piece that shows the group's melodic side in ominous fashion. After about four minutes of that examination, the more traditional metal resurfaces, breaching with a driving drum pattern and bass riff to match. Following their ride, a sink back into hissing drones leads the way to the finish.
Though it's a quick trip through the mini-album, Chasmdweller certainly make a good showing in that stretch, and their blending of well-executed death doom with more uncommon elements shows not just a promising inclination towards experimentalism, but also a refreshingly out-there twist on a style that can often end up too predictable, even while staying enjoyable. That they don't blend the metal and dark electronic portions more directly into each other is a bit of a shame, but as an introductory release, it does a great job of piquing interest while letting its songs stand firm on their own. A very limited run of cassettes is up on the BandCamp page of the label, Static Void Records, or you can snag a digital copy for just $2. At the very least, swing by the page and give it a listen to hear some enjoyable oddness applied to the doom foundations.
~ Gabriel 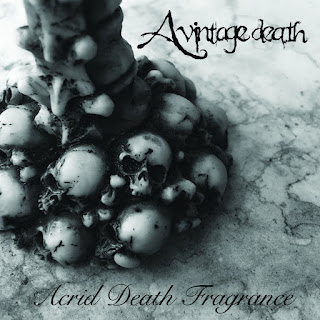 Making his debut with this EP, the one-man band of A Vintage Death emerges with five tracks, coming together for slightly under half an hour of material. Working a blend of death doom with touches of black metal, the music focuses on an atmosphere of gloom and ambiguous danger, and while there's often a brutal edge to the delivery, there's also a considerable amount of attention paid to the melodic side.
The fusion style allows Carmine d'Annibale, the mind behind the project, to shift through a variety of speeds in short succession, slipping from the intensity of quick beatings into brooding downtempo action, and the flexibility of that aspect shades the other instrumentation as well. While the guitar often comes through in a droning grind, it's laced into the beats and bass with such deftness that the difficulty of assembling all the parts single-handedly can be easy to forget.
The production is, as might be expected of a one-person project, on the rougher side, but that suits the mood and energy of the music, for the most part. A little more separation of the instruments wouldn't be unwanted, but as it is, it effectively evokes the olden days of each of the constituent styles. All together, it's quite an enjoyable experiment, and one which I hope will see follow-up releases.
~ Gabriel

For Fans Of; Altar of Betelgeuze, Amort, Battle Path, The Maledict, NEST 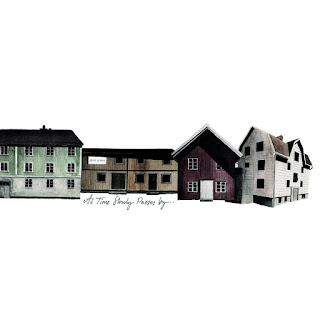 We last heard from Molior Superum with their Electric Escapism EP back in 2014 (man, time flies), and half a decade later, they've returned with this full LP to follow their 2012 debut. Starting with the title track, a trim little piece of melody exploration, the band sets a tone of fanciful warmth and casual technical prowess, letting their deft finger-work and ear for tonal-rhythmic intersection guide the way.
With the progression into “Att Födas Rostig”, things get a bit dirtier in flavor, as the guitar takes on a southern blues twang, making for an interesting pairing with the Swedish lyrics. The heavy rock cruising is kept light enough for some shredding to slip smoothly into place among the rowdy riffs, and that balance between tunefulness and a dirty bass end is developed in a variety of ways across the rest of the album.
While there's a lot of '70s hard rock influence to be heard in the songs, the band does a great job of putting a personal spin on it, finding ways of tweaking it into something that stands apart from most heavy rock acts of then and now. It's hard to pin down the specifics of that distinction, but part of it is just how fresh the songs feel. They don't get bogged down in the bass, but the lightness doesn't drift off into pop rockish cotton candy clouds, either. Whether incorporating vocals or going off on sprawling instrumental rides, Molior Superum make it clear that they kept developing their skills in the time between releases.
Infectiously fun and compelling (more than once, I found myself humming along to a song I was hearing for the first time), the songs ride a fine line of having clearly gone through lots of crafting while still holding a spontaneous air to their twists and shimmies.
At a fairly trim 37 minutes, the album is kept focused, energetic, and engaging, while also being long enough to keep a few secrets back from the initial listenings. While it's not set for release until March 29th, you can go ahead and order vinyl copies of the album, in a variety of colors, directly from Molior Superum's BandCamp page. As there's only 100 of each color pressed, you'll want to snag it fast, or be kicking yourself about missing it.
~ Gabriel 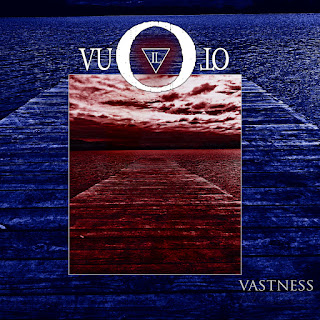 With his debut album, released back in 2015, the one-man band of Il Vuoto served up a powerful concoction of atmospheric funeral doom, with the art, titles, and music coming together in impressive union. The follow-up album has finally arrived, and with its hour's worth of material spread over five tracks, it certainly makes for a worthy succession.
The band's orchestrator, Matteo Gruppi, puts care and consideration into every part of the album, and while the track titles have been made somewhat less theatrical (with the previous names including “I, Essence of Nothingness” and “Through Mirrors I Saw the Ghost of Me”), the comparative directness of titles such as “Weakness” and “Her Fragile Limbs” opens them up for more expansive story-telling. The lyrical approach follows a similar course of restraint, with the melancholic vulnerabilities they express meshing right into the dirge-like guitar tones and melodies of suffering.
While the drum-work rarely gets brought to the forefront, Gruppi does a great job of using it to reinforce and intensify the songs' rhythms. Likewise, the supporting synth textures are subtle, but present throughout the majority of the music, which moves through a nicely wide range of dynamics and moods over the course of the album, while retaining its sorrowful doom base. Closing out with a relatively short instrumental piece, “As the Whole World Failed”, Il Vuoto maintains his careful control over the emotional direction to the end. There's a lot to savor within the songs, and their large size is put to good use in furthering the moods, rather than just stretching to fill time. Well worth the wait, this album is well-suited for cold weather, or just for savoring some finely-made dark atmospheres. CD copies can be ordered from Hypnotic Dirge Records, while digital (and the rest of Il Vuoto's catalog) is up on his BandCamp page.
~ Gabriel

For Fans Of; Descend Into Despair, Funerary, HellLight, Nonsun, Towards Atlantis Lights