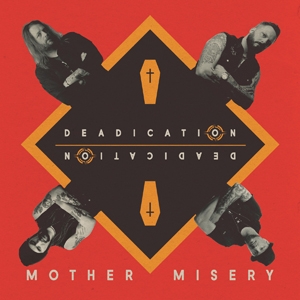 Having been around in some form or fashion since the late 90's, Mother Misery has a long list of albums to stand on top of when putting out this latest EP "Deadication" on Transubstans Records. And as with any Swedish band that seem to make it's way across this blog, they're some of the best at what they do, which is melodic and heavy hitting rock and roll. The gigantic and powerful vocals are one of the first things to make you take notice when the album starts to play, but digging past them a bit shows off crunchy guitar riffs, and solos that scream out to be heard. This effort is a quick six track blast, but those six tracks can be played again and again without wearing thin. You'll find something different each time once you start digging into the melodic and heavy layers that make up each song. Opening up with the track "Scars", it serves to launch the listener directly into a high octane rock song, and makes quite the impression. After starting off with a little industrial noise, things get rolling after just a few seconds with a howling guitar riff and pounding drum rhythms. The vocals make their grand debut just a little bit after that, making their presence known immediately. This is an excellent opener for the other five tracks, and while it gives you an idea of what's about to come, it doesn't prepare you for it. "Deadication" isn't out until June 26, but you can grab a pre-order CD from Record Heaven.
~Skip