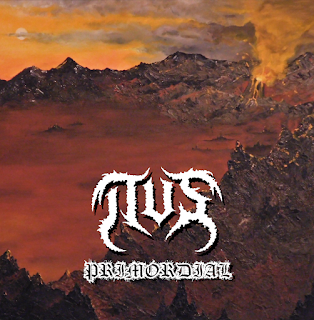 Marking the first non-single, non-cover release from this Canadian band, Itus' EP Primordial comes together as just over twenty minutes of sludgy doom with an emphasis on melodic hooks. Balancing out that grooviness with high-pressure harshness from the vocals and guitar tone, opening track “Cloud Reader” pulls listeners in with alternations and build-up of those two sides, Good flavor, solid riffing, and impressive back-and-forth between the band-members kicks things off with a strong lead, picked up by “Question Everything”. Changing to a crunching rhythm for the opening portion of its run, the second song settles into a heavy grind, with plenty of change-ups to keep things interesting, and a rattling climax followed by a feedback bridge.
The title track takes middle position, with the vocals mixed into a submerged crush for the slower parts, but rising back up in the mix to match tempo escalations. It also features maybe the hookiest riff on the EP, and finds its counter-weight in a haunting scream before kicking in more of their sludge influence. Rather than settle into a predictable pattern, they follow that with “This Can't Be”, a moody, contemplative piece which takes more from funeral doom in its styling. Drawn-out chord strains and sustained tone adjustments complement the (mostly) clean vocals, pulling thoughts of early Bell Witch material to mind.
Lastly, “The Chaplain” brings the EP to a close on a lush and vibrant note, with early tone study gradually turning to a concrete structure, joined by vocals and regular chording. Taking its pacing carefully, the song grows in sinister intensity and pressure, riding its way up to a pounding crescendo and feedback finish. A very strong first release, and well worth checking out for doom fans looking for something with some brains behind the fuzz.
~ Gabriel

Power Of The Cosmos... 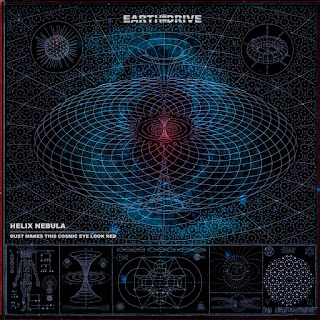 Coming about three years after their previous album, Stellar Drone, the Portuguese band of Earth Drive are back with more tracks than any of their other albums. Subtitled “Dust Makes This Cosmic Eye Look Red”, the new album shows Earth Drive continuing to hone their mix of heavy psych and space metal, and the results are downright fantastic, though it takes numerous play-throughs to appreciate just how much they've packed into the experience.
The first of the dozen included on Helix Nebula is the intro-ish “Cosmic Eye”, which matches a jangling guitar riff to deep-throb bass alternations, kicking things right into gear. A fade leads to the title track, in which rolling rhythms shift momentum between the two lead vocalists, on the back of guitar and drum swells. The excitement of the band to be back is evident, and it's hard to not get pulled in by that energy, along with the hooks and power of the song itself.
As things cruise on from there (with the transitory track “Holy Drone” guiding listeners inward), the care that the band has put into giving the album a persistent sense of flow becomes increasingly evident. Careful handling of the songs' energies creates something of an undertow effect; you try to think back to how the music got to a certain point, and you have to keep threading further and further back, as it builds on itself so much throughout the album.
To be clear, Earth Drive most definitely do not sacrifice individual song quality for the shape of the overall album. Song after song rocks and captivates, with nuances and twists helping to distinguish each track, though the underlying character is clearly consistent. Grooves and deep riff explorations are given full due, and the band's knack for going from an introspective moment of quiet to an outburst of liveliness gets put to superb use several times.
A pair of 'bridge' tracks (“Nagarjuna” and “Anulom Vilom”) mark the change-over to what would be Side B on a vinyl release of the album (and can some savvy label license this band's discography to make that happen already?). With the first return to 'full-length' song size, “Science of Pranayama”, ED reassert themselves in what feels like the album's climax, with the meditative “Deep Amazon”, expansive “Space God”, and outro of “Phantalien” following. All together, the new album is outstanding, and shows quite thoroughly how Earth Drive keep building and developing on the ideas of their earlier work. If you're a fan of heavy psych, do not let yourself miss this.
~ Gabriel 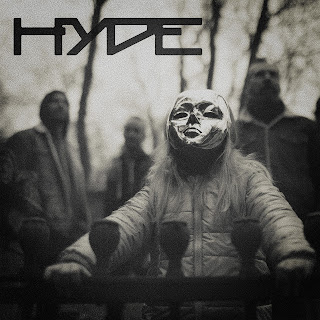 Made and recorded in France, with mixing and mastering handled in Sweden, this debut album from the band known as Hyde packs seven solid tracks of heavy desert rock. Coming together at just over forty-five minutes, the band spreads their wings with style and plenty of memorable hooks, and shows that they've got the chops to keep their chosen style rolling through songs both short and long.
Opening with “The Victim”, the band starts on good footing as big riffs rumble on, get tightened up for the verses, and swell again on the choruses. It brought Kyuss to mind, but Hyde have put enough of their own spin on the vibes to keep it respectable. “Black Phillip” follows, slowing down to more of a doom rock mode, though the vocals hang on to their warmth. Again, the guitar riffs are where the power stands out most, as they hit a savory balance between hooky melodics and craggy roughness. Some spoken/whispered touches, particularly in the subdued breakdown, help shape the song's atmosphere further, making for a brief bout of creepiness before surging back up into the rock.
“Tsunami” takes things in a direction even slower and colder for its intro, and while it retains some of that tone for its remainder, it's largely back into the heavy desert rock. The tail end of the song lives up to its name with a swelling crescendo, then it's on into “D W A G B”, the most mysteriously named track of the album. Making use of an extensive sample (you'll just have to listen to place it), the song is otherwise instrumental, and it's one of the harder-kicking rides Hyde offer so far.
It also marks the halfway point, as the last three songs (“Hunter's Run”, “The Barber Of Pitlochry”, and a self-titled track) add up to twenty-three minutes of the total play-time. Fittingly, it's here where the mood and feel of the songs grow to their biggest proportions. Add to that the compelling flow within the tracks and between them, and there's not much choice but to just go with the ride through the back half and enjoy the massive grooves. Of course, “Hyde”, at eleven minutes and change in the closing position, is the one which dominates, and which shows the band working the most structural changes into their song-writing. All in all, a solid debut, and one which should have desert rock fans keeping an ear out for more to come from Dr. Jekyll's dark side.
~ Gabriel