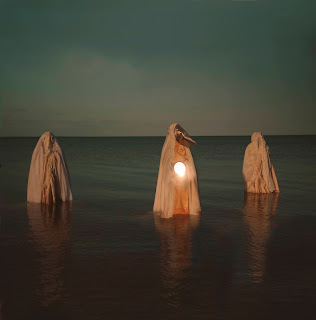 Following up on a rehearsal track from 2017 and their debut EP from the start of last year, BongBongBeerWizards (you're already down just from the name, right?) are a German trio with plenty of fuzz to live up to their chosen moniker. With the time off to craft this return release, there's more thoughtfulness to the music's arrangements than the name might suggest, and they carry themselves well, pulling off a tough balance of garage-like cragginess and expansively spacy polish.
Leading off with “Melothrone” (which I'm guessing is an allusion to the classic Mellotron), the new EP gets off to an enjoyably grimy start. Riding deep feedback rumbles and pacing itself with the drummer's wary-sounding beats, the tune grinds through the grooves with a serrated sort of vibe, building momentum until the vocals arrive in an effects-laden entrance. Providing warping tension, mixed somewhat low against the rough riffage of the guitar and the rising punch of the drums, the wordless (or so I'd guess) singing lends things a spike of psychedelic vibrance to lift the heavy doom patterns. Running just over nine minutes, it's a clear guide to their style and character for those who might have missed the earlier efforts. They even pack in a break and bridge before the last couple of minutes, with an hooky rolling riff against cymbal clangs providing a bit of good-natured spookiness before the fuzz comes in like a tall tide.
“Journey” follows from there, easily the shortest track of the EP at just under three minutes, and it turns the atmospheric inclinations shown earlier into a short but haunting bit of tone exploration. It's a nice (and high-contrast) break with the weightiness of the opening track, and concisely demonstrates the band's facility with sparser song-writing, while keeping it both bare and forthright enough to bust any beliefs that they're getting by on the FX. The clean vocals, slight string echo, and restrained percussion all come together wonderfully, lulling the listener into a chill before the next song strikes.
“Meathead” rides an opening touch of drone into more somber territory, with the vocals shifting down to an ominous and thoroughly distorted call-and-response dynamic between the higher and lower singing. Riding the groove deeper and deeper, augmenting it with additional layers of instrumentation (or just more pedal activation, maybe), they pull some real Sleep vibes into action, providing what will likely be the high point for many listeners. Lastly, at more than ten minutes by itself, there's “Summoning”. I have to acknowledge that the opening of this had my cat spellbound. After its 'doom UFO' antics fade out, the heavier, more serious side of BongBongBeerWizards returns, prowling through a valley of semi-jammy but still powerful stoner doom flexes. It deflates the tension built by the preceding tracks, to a degree, but it also feels like a fitting finish, just kind of sprawling out into the smoke. All in all, there's a lot to dig into with this EP, so if stoner doom is one of your preferred styles, be sure to get a copy once it drops.
~ Gabriel