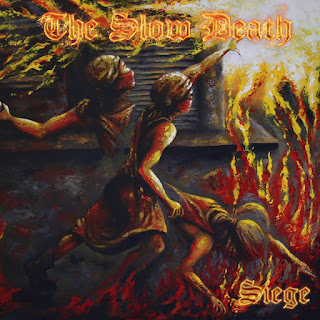 Hailing from Australia, this death/doom quintet has some common ground leading up to their current incarnation. Not only is this the fourth non-split album to come from The Slow Death, but three of the members are also in Horrisonous and Illimitable Dolor, with the two vocalists (one of whom also handles keyboards) having been plucked from Muskrat and Oracle of the Void. With the shared history between the main instrumental members, you'd expect to find this project approached with a strong sense of purpose, and just from glancing at the track times, that suspicion seems borne out. Totaling just over an hour, split between four songs, it's clear that the band has their ambitions set high,

Opening track “Tyranny” leads into its body with a lush intro, strings and keys drifting over each other in a dreamlike softness. Of course, it's not too long before a harder edge shows itself, as the bassist steps in with a staunch riff and gliding resonance, eventually joined by faster guitar and one of the vocalists (Mandy Andresen), who provides an earthy vibe not dissimilar from early Windhand or Jess And The Ancient Ones. That warm vibe is counter-balanced by the deeper growls from second vocalist Gamaliel, allowing the band to give a more human than usual manifestation of the death/doom contrast. Where Andresen's vocals might be put against chugging guitar, Gamaliel's might find some lightly plucked acoustic string backing, and so on. It's a clever and compelling approach to the music, but even beyond that clear hook, the songs are structured with care. Lengthy as they are, the numerous sections within the songs manage to avoid dragging. Instead, there's both emotion to savor in the moment, and the anticipation of the next shift, with the assorted movements flowing smoothly into one another.

The band also brings a pleasing variety of tonal and timbral qualities. Even within the opening track, the guitars shift their moody presences around from menacing, to meditative, to mournful, and more. While there's not the sort of overt time signature jumping and staggered rhythmic play that might make your mind jump to prog, there's certainly some progressive spirit animating the musicians' approach to the song-writing. Take “Famine”, for example, which alternates a rolling, almost Iron Maiden-ish rhythmic pull (down-shifted to doom gear, of course) with slower, more somber sections. Not a new trick for doom, but the band deploys it wonderfully, returning to the harder riff each time with increased ferocity, chewing right through the song's thirteen minutes. Even if you're not intent on picking apart the songcraft, it's easy to sink into their deep grooves and savor the work put into them. All together, it's an excellent and impressive piece of work. If you're in search of thoughtfully crafted doom, don't let this one go unheard.