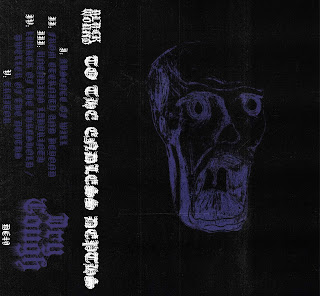 On the physical release of their debut EP, the Swedish trio of Black Wound serve up a heady mix of death and doom metal. Despite their young ages (with a drummer who's currently 17), the band has a solid lock on the style and substance, delivering music with enough dark potency to shame groups twice their age.

Opening track “Absence of Will” jumps right into their swampy stew of deep bass riffs, growling vocals, and clanging percussion, with abrupt time signature and tempo change-ups meshing into the grim gurgles and noisome grooves. “From Eternity and Beyond” continues the intense outpouring, with the clangor of the cymbals rolling against the buzzy fuzz and submerged howls. All the while, they keep up some hooky rhythms, pulling listeners along through the surface-level chaos and into the sunken structuring. It also features one of their more memorable breaks, with a desolate-sounding solo taking advantage of the speed and separation contrasts.

“Unending Labyrinth” carries on with more of a classic death metal groove, though it's one which lets the drummer really flex and showcase his chops. Meanwhile, the guitarist goes hard in on his riffing, with a circling progression that suits the track title. “Lurker of the Threshold / Dweller of the Depths” brings a touch of Lovecraft to the imagery, though it doesn't alter the flavor of the music itself in any drastic way. Some extensive tone sustain fits with the monstrous depths and distance ideas of the title (at over seven minutes, this is also the EP's longest excursion). Then it's on into closing track “Traitor”, which shifts back into a more focused grind to match the succinct title. It's one of the cleaner-sounding tunes on the EP, with another stand-out solo freed from the ambient din that marks most of the songs found here. All together, it's a damn impressive first work from any band in the death/doom cross-pollination, with heaviness and brutality overflowing. Here's to the arrival of Black Wound, with hopes that their next release arrives soon.