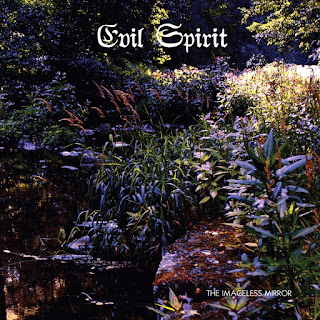 Performed by just two members (Marcelo Aguirre on vocals and percussion, Ari Almeida on guitars and bass), this mini-album bridges the gap between the German group's first album, Cauldron Messiah, and their second LP, which is still cooking. Over the course of this release's five songs, the duo brew a mean atmosphere of low tones, strained strings, fierce wailings, and malefic attitude, bringing slow doom slogs and sludgy burners together with panache and a startlingly large-scale vibe. Heavy slams and gnarly riffs are in plentiful supply, there's a hefty Death SS cover which Evil Spirit does a great job of making into their own thing, and the music includes several creative surprises that are rather neatly worked into the flow. If you're like me, and haven't yet heard the group's first LP, this is a great introduction to the band's style and capabilities, and should leave you wanting to check out more of their catalog. Of course, that'll mean you'll end up hungering for that second album to show up, but that's an acceptable price to pay for music this stimulating.
~ Gabriel
For Fans Of; Brume, Heavydeath, Narcosatanicos, Sunken, Uroboros