Laughter In The Dark... 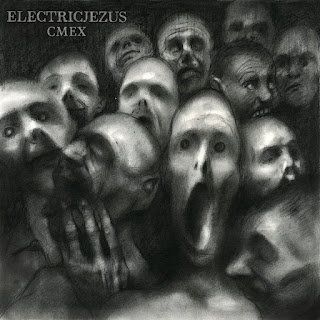 It's been four years since the last solo album from the Russian duo of Electricjezus, but the enjoyable power shown in that last release (Котлован) has, by all signs, continued to strengthen in the intervening years. Opening with a slow riff study in “Соки земли” (or “Growth of the Soil”; Electricjezus continues to kindly provide translations of their titles), the band (re-)establishes their guitar and drums M.O. with panache, picking up energy and speed as they move into the subsequent tracks.
It's in those follow-ups, like “Приговор” (“Sentence”), where the sludgy potency of the band is made explicit, with their handling of momentum steering the swampy chords and weighty beats into feeling impressively sizable for a two-man operation. The absence of a bass (guitarist Ruslan employs a bass pick-up, instead) in no way keeps them from bringing suitably dark and heavy tones to the agonized audio experience. Special kudos to Ruslan's vocals, which are used infrequently, but consistently sound as though they're being sourced from someone in the middle of being crushed by a boulder. In a good way, of course.
And for a couple of the tracks breaking the ten-minute mark, the music maintains a good pacing, moving along without seeming too sluggish, in spite of the low-end, low-tempo, low-life vibes they keep in play. And despite the sparse instrumentation, the songs do a great job of catching you up in the grooves, getting swept along without any doubt of a satisfying experience. They've found what works, and trimmed off all the fat, leaving an excellently crafted batch of weighty tunes to do their job, and do it damn well. This is one of those to take in the first time, let it sit and digest for a while, then dig right back into it to figure out what you missed because you were too caught up in the groove to savor all the details. Hats off to Electricjezus, once again.
~ Gabriel