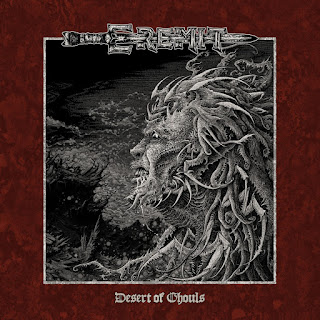 Wasting no time in following up on their debut album from last year, the German trio of Eremit have unleashed this two-track EP, released (as was their LP) by the prolific Transcending Obscurity Records.
Leading with the nine-minute “Beheading the Innumerous”, the band rapidly rumbles up to action speed, pulled upwards by a growler of a riff and stabs of guitar feedback. As the rasping vocals make their way in, the tune congeals into a firmer groove, still working that central riff and showing how durable it is. Some tempo adjustment about midway through leads to more of a groove rider, but the original heaviness and raw vibes remain intact. Things ramp back up to higher speeds for the finish, with a grinding last minute leading to the next track.
The B-side is “City of Râsh-il-nûm”, and while the song doesn't quite deliver the Tolkien-ish mood suggested by that title, it does take its time at the start to build up a gentle atmosphere. Some slow string action, quiet percussion to guide it along, and some echoing bells or chimes glide along for about three of the song's twelve minutes. After that point, some amped guitar enters the mix, perking things up and providing enough dissonance that you may get a few goosebumps prickles while listening. Gradual increases on the general heaviness follow, making the song something of a study in the band's ability to pace itself while pushing onward. Slightly before the mid-point, they kick into hard gear, bumping up the volume on everything along with their intensity, and continue to cruise while finding additional elements to introduce along the way. All around, a good showing from this band, with some fun clues as to where they'll be going from here.
~ Gabriel