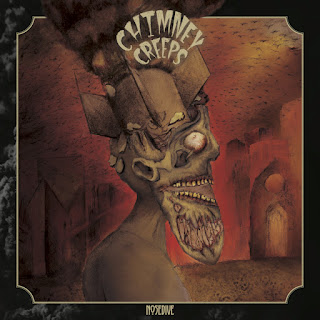 Popping up from New York with this, their debut album, the power trio of Chimney Creeps (like chimney-sweeps, get it?) brings a seven-song batch of sludge-varnished heavy rock to the table. Flexing their style and rotating member focus on the instrumental opener “March of the Creeps”, the band shows a bit of grunge flavoring, but with a leaner, buzzier approach. It's a good foundation-setter for the next tune, “Head in the Sand”, which brings in guitarist Dennis Haggerty's lead vocals, striking a balance between punkish barking and moments of melodic harmonizing. Both the bassist (Donavon deCesare) and drummer (Alex Hadjiloukas) provide backing vocals throughout the album, pulling their performances in the songs that much tighter together.
As the songs go on, the band shows its facility with crusty riffs, big swells, dirty grooves, and beefy bass-lines. Keeping up a steady current of wounded anger, the group digs out old-school hooks and gives them a modern sharpening, while keeping the underground vibes well in effect. Things get a bit expanded in the second half, with the closer of “Diving Line” shading out into a number of stony bridges. Riding out on a big-finish groove, the Chimney Creeps make it easy to spin the album time after time. It'll be interesting to hear how their style develops with subsequent releases, whether they play up their dirt rock, grunge, or sludgy sides, or keep honing a fusion of the three. However it goes, if you've been in the mood for some audibly authentic heavy rock, you'd do well to pick yourself up a copy of this album. Available on vinyl and digital, both at very reasonable prices.
~ Gabriel