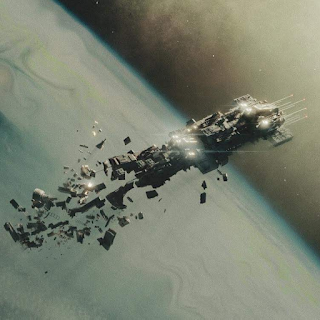 Delivering their latest in a string of releases stemming back to 2014, the Pennsylvania-based trio of Gods of Space provide a concisely cosmic trip this time around. Packing five tracks and coming in a few minutes shy of half an hour, the band makes great use of their time, pushing ideas in a range of directions while keeping the hard psych flavors flowing continuously.

First of the tracks on the EP is “Against All Odds”, a soaring ignition piece with some hard bass-line riffs cranking it along. The gritty timbre of the strings contrasts nicely with the clear tones of the vocals, while the drummer's change-ups in intensity add a further layer of action. Pop in some tasty (though brief) guitar soloing, and it's a solid groover, not to mention an enjoyable wake-up tune if you play it early in your day. “Exit Point” follows, shifting to a darker tone; fitting with the EP's concept, this is presumably the point at which our intrepid crew of astronauts hits the point of no return, and the deep, quick-moving riffs fit the mood wonderfully.

“Falling Sky” picks up at the mid-point, employing a bit of retro stoner rock foundation before amping it up and skewing into full-blown '60s psych touchpoints. It's one of the easier tracks to let your mind glide along with, thanks to an extended breakdown section that really evokes the ship reaching its peak, and then beginning to collapse. “Sub Orbital” follows that up nicely with strains of melancholic melody contrasted against harder, engine-like chug riffs. The flow is good, the concept flavors are on-point, and the music is reliably solid.

Lastly, there's “Surf”, the EP's longest track, which opens on a stripped-down arrangement using string hammering for a chilly, desolate vibe. As it sprawls out into livelier tones, the band shows their facility with delicate arrangements, while the drummer keeps a reminder of the doom in store for the cosmonauts evident in his brooding beats. A fiery crescendo into an unwinding finish provides the perfect cap on the experience, and making for a truly impressive release from Gods of Space. The official release date is April 20th, so if you didn't already have that date circled on your calendar, go ahead and make a note to grab a copy of this that day. I promise you, it will not disappoint.