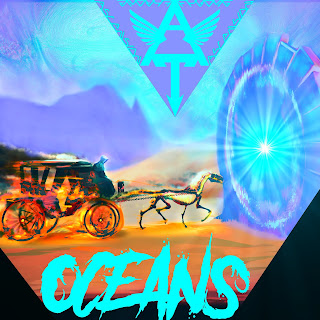 Well, here's something uncommon, at least to the genres we tend to focus on around here. It's a concept EP based on a videogame series (the Nier series, to be specific). Running three tracks long, it's also the debut release from the German group of Ascension Throne, put together during the dull days of pandemic lockdown.

Opening with “Warriors”, a nine-minute slice of slow-moving metal, the EP gets off to a gentle start with dreamy female vocals over thrumming bass-lines, with male counter-parting joining in before long. The contrasting vocal presences make for an interesting dynamic, and the music itself finds an uncommon blend of styles; there's some doom flavor to the big bass reverb, a general post-metal attitude, and a proggy nimbleness as it moves through its paces. The female singer (credited as Tetem) has a bit of a Julee Cruise thing going on, very tender and sweet in delivery, and to be honest, she kind of steals the spotlight.

Middle track “Kainé”, at six minutes, is the shortest song on the EP, and it shifts the focus to piano for its intro, backed by some heavy drum-work. When the guitar comes in, it's with a swerving bit of growl reminiscent of Yasunori Mitsuda's work on the Chrono Cross soundtrack, if we're looking for other video game comparisons. The sectional change-ups are more distinct in this track, possibly owing to the comparative compression of the song-writing against the lengthier track that preceded it, and it makes for an easier time of picking out the individual musicians' respective talents.

Lastly, the title track opens up with some moody synth textures, allowing for a meditative atmosphere before the rest of the instruments come crashing into action. Balancing melodic lightness with the bass' grinding weight, it adds to the band's defiance of easy categorization, while continuing to showcase their skills in layered song-writing. Altogether, an impressive debut, and one that should draw in even listeners who aren't familiar with the games that inspired it.