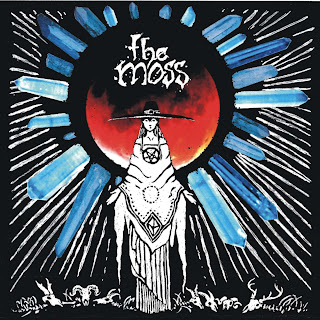 Damn I love it when I find a new band that sound like they were forged in the early 70's in a cramped smokey basement following an inspiring Zeppelin gig. I swear I was born about 30 years too late.
Sadly I have neither a tweaked DeLoren or some Jean Claude Van Dam Timecop like device, but thanks to The Moss I can feel like I'm reliving an (arguably) better time for music.
Sure, from first glance at the artwork you may think that you should be expecting some doom type affair. No so. Far from it in fact. Expect blues influenced retro rock with break downs worthy of being confused with those in classics like Physical Graffiti or Deep Purple In Rock. Yeah theres a few bands knocking around with clear classic rock influences but none of them really have that true early 70's feel like The Moss do. From the whaling distorted riffs down to the vocals, it the whole album is bathed in that awesome old school tone, even in the few sections that slow down and take on a darker more slightly prog like feel.
I love this album, its such a fantastic breathe of fresh air plus if like me you were brought up listening to you old mans record collection and bow down to the trailblazers from the 60's and 70's then you will seriously love this album too.

The band have been really cool and given me a code for a free download of the album, but c'mon show the guys (and girl) some love and pitch them a few bucks. $7 really aint much for a belting 12 track album. Plus if they can get enough cash hopefully they'll get it pressed on vinyl so we can all listen to it the way it was meant to be.