Bringing Back The Organ... 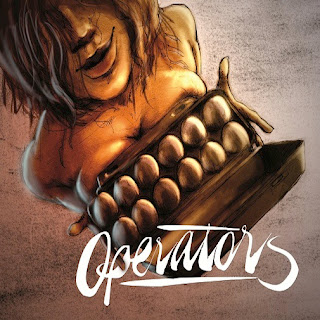 The better an album is, the easier it is to review. Now that sounds like I'm just stating the bleeding obvious, but quite often I'll whack on an album which has all the right credentials - Catchy riffs, throbbing bass, clever vocals etc and I will be plagued with writers block. Other times I'll be sent something that doesn't instantly blow me away but will cause me to just churn out line after line. More often than not, with repeated listens, these albums go on to become some of my favourites. Monster Coyotes Stoner To The Boner and Giants Old Stories are a prime example of this phenomenon. As for Berlin based 6 piece Operators, well they've just joined the roster.
Like a cross between The Doors and Kyuss, the end product consists of two equal and big fat dollops of both desert rock and classic 70's inspired psychedelia. Being able to ooze with that retro feel doesn't come easy though, you need to be able to pay homage to the greats without entirely ripping them off, acquire the unique classic tone and arguably most importantly... Master the organ! Now I know that last point may have instantly turned off any of you who predominately or almost exclusively listen to hardcore or such like, but for those out there who like me grew up listening to their parents record collection it should very well invoke somewhat of a pleasant nostalgic curiosity. Rightly so too, because if a band is really trying to nail that classic sound the most defining way of knowing whether is been done right is by the ability to fool the listener into thinking it really was recorded in that era amongst the true greats. With that in mind, the chaps really have well and truly knocked it out the park here. Catchy, unique and executed with with a blinding amount of skill and ability if the album doesn't get your foot tapping and arms air drumming straight away, just give it another listen. If you're not sold on it immediately a couple more spins should do the trick.
Now the guys have really done us a solid by offering up a great free download. Hit it up below and send them some love. Hell, 5 bucks for this little gem is an absolute steal!