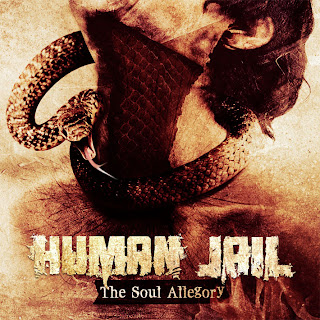 Surprisingly we've not had a massive amount of submissions from our neighbours to the south, which is kinda strange as from what I'm aware of France does seem to have quite the thriving hardcore scene. So when drummer Chris hit me up with his bands bio my attention was instantly grabbed.
Formed in 2009 the four piece carved out their own brutal sound using a fusion of souther rock style rhythm and the unrelenting ferocity of heavy stoner metal. A formula often attempted but sadly, rarely executed to particularly high standard. But at the end of the day, it no easy feat to find that find balance of good old southern groove and pair it off with an angry and raw metal edge. Luckily it seems as though the Human Jail boys have really been putting the hours in over the last couple of years as they have managed to hit a bit of a sweet spot with this album. Right from the get go you can hear exactly where all their time and effort has gone. Opening with a very deep south sounding acoustic jam the first track Playing The Loosing quickly changes its tempo and launches head first into some balls out unadulterated metal.
The whole album just snowballs from here on maintaining the initial pace and anger throughout. Anyone who even remotely enjoys the likes of Phil Ansalmo's ventures over the years should really dig this album. It really has something of the NOLA scene about it.