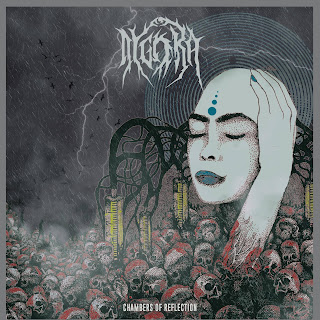 Following up on their Prelude to Revoluton demo from 2015, the London-based quintet of Dygora have returned with four more tracks of death metal with a dusting of sludge influence, sounding pretty polished with the production of their beats and growling guitars. The vocals, despite their consistency in delivering a rough gnashing, are probably the least interesting component of the music, and often feel like they're just distracting from the instrumental meshing, with their most engaging usage being when the rasping is played as a rhythmic counter-point or overlay. Past the dirty tones of the guitars and bass, and a couple of spoken samples in the last song, there's not that much sludge influence to be found, unfortunately, and for the most part, the songs chug along without taking breaks to indulge in more textured effects, or to push their intensity and aggressiveness up to blackened levels. While it may be an improvement from their demo days, it also shows plenty of room for the band to continue defining their style as something more distinctive, though the near-half-hour of material here should please those who are just looking to satisfy their cravings for some blast-beats and barking.
~ Gabriel

For Fans Of; Blood of the Wolf, Matalobos, Necrophobic, Reign In Blood, Throne of Heresy