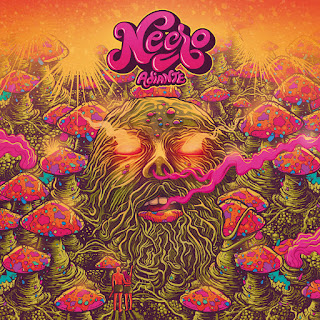 Though originally self-released in digital formats by Brazilian band Necro back in 2016, Adiante didn't get a CD pressing until the following year, on the Abraxas label. Now, in 2018, it's finally getting issued on vinyl by Electric Magic, the label run by the excellent Samsara Blues Experiment. Along with my personal fondness for the group since hearing their debut LP on Hydro-Phonic Records back in 2012 (when they were still going by the name Necronomicon), that seemed like enough of a good excuse for catching up with the album after such a delay.
Running seven tracks and ~40 minutes long, Adiante opens with “Orbes”, which leads with a slam of drums and a flourish of electric guitar before sliding into a heavy psych groove that it follows through several twists of tempo and rhythm before bouncing out on its funky finish. The subsequent title track carries that energy to a higher level while counter-pointing with some staunch bass riffs, before “Azul Profundo” comes in for a luxuriant ~7-minute ride through more heavy psych, now with a pronounced prog flavoring guiding the instrumental interplay on a wild ride to the end of the A-side.
The second half maintains the cool flow, letting the drums get some spot-lighting with “Viajor”, balanced against a fiery guitar solo into electric organ breaks. “Entropia” follows, going back and forth between gentler action and crunchy riffs, and leading into the relatively traditional heavy rock structuring and explosive finish of “Espelhos e Sombras”. Lastly, “Deuses Suicidas” rolls up on a fierce drum-and-guitar charge, brandishing an almost honky-tonk-y swagger while bringing in all the preceding styles for a fantastic finale.
It's quite a relief to find that the band has kept up their high quality from earlier albums, and more than that, to find that they've continued growing and experimenting with that already-strong base. Fans of heavy psych should certainly check this one out, and while the album won't be shipping out until the end of the month, you should probably go ahead and get your pre-orders in, as there will only be 300 vinyl copies pressed. Long live Necro!
~ Gabriel