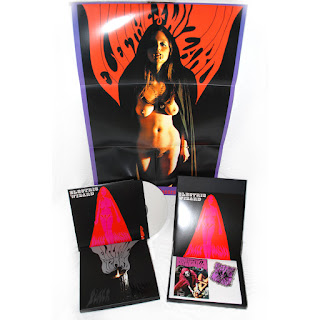 I wont bother reviewing the whole album because its no doubt been done to death on a a lot of similar blogs, plus we all know what to expect from Wizard anywho.
Now this has become an instant holy grail esque collectors piece. It took (and yes, I actually counted) just three days to sell out when it first became available to pre-order back in November! Not that that's really a surprise to anyone, given that pretty much every single Wizard release flies off the selves faster than a blink of an eye.
So what do you get for your bucks? A fair deal as it turns out. Not only do you get the gatefold double LP on 180g black vinyl (which is no different to the regular gatefold edition by the way) but you'll also find a nice little Crypt of Dracula comic, embroided patch and a huge poster containing boobs and bush and all presented in a nice solid glossy box.
Not bad for just £35 in my opinion. In fact, if you've already got one on order, think of it as an investment because over the next week or so I reckon some of these will be on slapped eBay for at least double the original price.