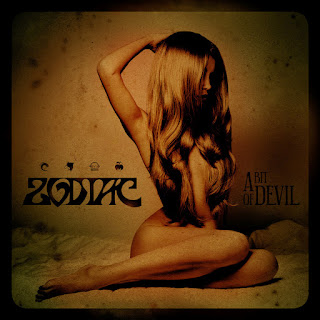 The story behind this album's opening little ditty is that a couple of musicians all the way in Germany were jamming together, they were digging the sound, one thing led to another and Zodiac was born. They came out with a demo in 2011 which is also top notch (and a link to which can be found below) but the this years album A Bit of Devil is the focus of this article.
They have captured a very concrete sense of what it takes to make a southern style blues influenced rock song. But nonetheless, they still add a bit of a modern flare to it and some psychedelic elements in the mix. The guitars are crackling with distortion, the bass is outstanding, the vocals are gritty and the drumming drives the whole thing home. But just like the opening song Diamond Shoes, the entire album oozes with southern style. So what do the other tracks add? The great majority of them are still a very good heavy southern rock with a lot of modern hard rock influences. But that’s not all, they also have one slow acoustic blues song and another slow swingy but still distorted blues song. All in all, it’s a great album, with some variety in specific tracks. Get it while its hot!
~Bernardo