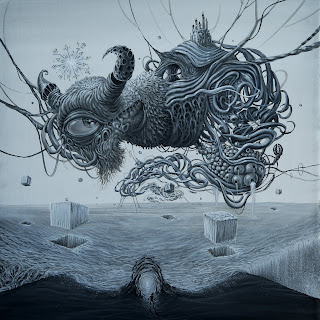 Releasing their debut album through the always-reliable Transcending Obscurity Records, the Italian group of Esogenesi pack a good forty minutes into the five songs of their self-titled LP, with their chosen combo of death metal and doom staggeringly well-blended this early in their career. “Abominio” is the first of the five, and with a sturdy central riff, the band is free to spin off into a number of elaborations and tangents without losing the core impetus. Some powerful break-downs and fiery bridges lend the song further flavorful variety, While the guitar and bass provide beautiful textures and dark atmosphere, the drummer may be the one who gets to shine the most in this opener.
From there, “Decadimento Astrale” picks up, with a harder riding beat leading the way to brooding but powerful progressions, with the development of a secondary riff providing the majority of the song's intensity. “...Oltregenesi...” follows, serving as a comparatively brief interlude at just under four minutes, with the guitarist brandishing his solo chops in a meditative instrumental piece with light backing from the other players. It's one of the album's most luminous moments, and transitions into the darker vibes of “Esilio Nell'Extramondo” extremely well. Rising from a slow, dirge-like groove into harsher and more strident form, the almost ten-minute run of this track is put to good use, with plenty of involved exploration taking the foundational riffs to new heights.
Lastly, “Incarnazione Della Conoscenza”, another ~10-minute piece, shows the band balancing the intensities of their two metal styles against each other, with a shift from slow passion to fast power shaping the song. It makes for a strong finish to the album, and all around, they demonstrate very impressive creativity and restraint for a band on their first release. Fans of this fusion, and of doom metal with some extra punch, do yourself a favor and check this crew out.
~ Gabriel