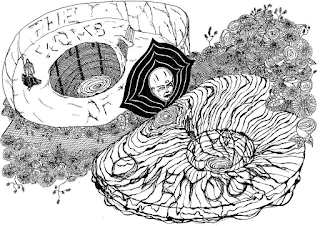 It's been a couple of years since we last heard from Ksyatriya (last time was their split with Animi Vultus), but they've made their return with a full album, hitting nearly an hour of instrumental doom. It's their first album since 2015's The Arduous Search for Freedom, and while the changes they adopted since then are intriguing, the continuity of their style is undeniable.
Leading with an atmospheric intro, expressively titled “And Thought was Born...and Duality Ensued...And the Universe was Lost”, Ksyatriya give a thorough crash course on their bass and drum-driven style, benefiting new listeners while ramping up into the album's body. Mood and tone are accentuated, with nuanced development of the central melody leading ears through the movements.
After that nine-minute opener is concluded, “The Flame That Illuminates our Hearts Burns for Eternity” picks up, bringing quick-moving guitar into the fold. The tendencies shown in the lead track are expanded, with the central riff put through its paces as the rhythms slowly shift around it. “To the Gates of Ōmeyōcān (Prelude I)” makes for a five-minute interlude after that, warming things up with an acoustic exploration solo before “Hypocrisy of 2” takes over.  That song, at about thirteen minutes run, finds the band working around alternation of styles in it. It begins by moving back into the realm of the electric for its first portion, before a moment of silence leads back into the acoustic melancholy; another momentary break, and the electric rises to merge with that acoustic line, wrapping the two together before taking dominance again.
“At the Gates of Ōmeyōcān (Prelude II)” follows, the shortest track of the album at just under two minutes, before the seventeen-minute “Peta Babkama Luruba Anaku (Open the Gate for Me So I Can Enter Here)” arrives to close things out. Intensified bass and bass drums lend this the heaviest vibes, and as with “Hypocrisy of 2”, there's some internal segmentation, culminating in a keening crescendo and coda.
While the album is largely absent of the vocal samples which have marked the band's previous releases, it's still quite distinctly one of their works, with thoughtful song-writing guiding the heaviness to measured purposes. Even with vocals at a minimum, there's plenty of character coming through in the songs, and the tiny little pauses they take before sweeping into a new mode help settle each one in memory. It's a pleasure to know that they're still exploring new ways of expressing their ideas, and to hear a different side of those reflections.
~ Gabriel

For Fans Of; Ancient Lights, Bell Witch, Earthshine, Flight of the Seraphim, Ufomammut