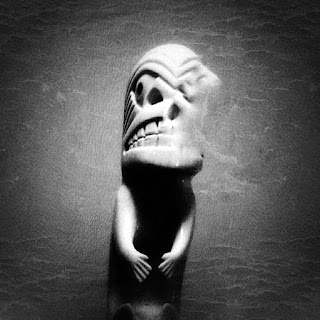 With almost two years of gigs under their belt, the Danish quintet of Sonic Moon have issued their first EP, and In Orbit brings a four-pack of tunes to entice listeners, opening with the desert rock twist of “Places”. Dry-sounding chords lead through harmonized yells and a bruiser of a beat, giving some good opening energy to the set.
The grungy grooves of “The Heavens” pop up next, letting hooky melody and tasty guitar tones mesh with rugged bass pulses and some high cymbal action, making an intriguingly heavy piece out of higher-end elements than are usual for the style, before “Something Else” picks up the lead. A little bit of atmosphere is set with quiet strings before a ripple of drums lead back to the beefier material, slipping in a little psychedelia in the end-of-measure guitar twinkle and twang, and the band spices things up by making good use of phasing on the line in the track's back-end.
Lastly, there's a ~7-minute self-titled song, and “Sonic Moon” makes use of its position and space by working a slow-burn escalation into heady riffage. The band's co-op powers really come to the fore in this slow-paced study, with each instrument getting plenty of time in the audio spotlight. For the band's first release, it does a great job of showing off their skills in a range of styles, speeds, and intensities, and provides a fair number of hooks to catch in your ears at the same time. Keep your head up for more to come from this crew.
~ Gabriel