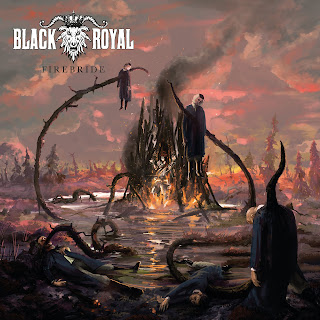 Riding high off the release of their first LP in 2018, following a single and a pair of EPs, the Finnish group of Black Royal are back to strike while the iron's hot with their second LP. Running right at forty minutes total, the album features nine tracks, blending together a number of styles, but always coming through with a strong sense of the band's character.
Opening with a melancholy, almost dirge-like bit of tenderness in the intro to “Coven”, the band shows an impressive way with understated melodies, before jumping into the hard and sludgy metal that makes up the meat of the LP's music. A chorus of “Please forgive me Satan / For I have not sinned” highlights a warped sense of humor, while an interjection of symphonic strings before the final minute gives an indication of the band's willingness to get weird for the sake of keeping things interesting.
From there, the group keeps things unpredictable but engaging, leavening the hard metal with streaks of moody melodics and psych inclinations put through strange filters. Strong riffs and the self-discipline to leave listeners wanting more serve the band well, and as firmly rooted in metal as the music is, they find ways to keep it up and moving that bring a touch of hard rock energy to the proceedings. Additionally, the riffs tend to be so firmly structured that they lean more into death metal than sludge, though the mix of styles keeps either from being a firm designation.
One of the biggest points of commendation for the band is how much distinct flavor and attitude they give each song (a personal favorite being “All Them Witches”). Though they operate with mostly the same tools from track to track, Black Royal show a high degree of creativity in how they deploy those tools, always incorporating at least a few change-ups to avoid getting bogged down in repetition. At the same time, they keep a recognizable spirit and energy going through all of it, and the momentum through the album is a persistent force.
Though the forty-minute run is likely to leave listeners wishing it had another couple of tracks tagged on, each song on the album is solid, and it makes for a stimulating and energetic showing of the band's capabilities. Check it out if you're looking for some powerful metal that can't be pinned down by easy description.
~ Gabriel