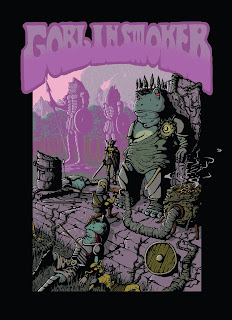 On their third release (already sold out of physical copies about a month before the actual release date), the UK trio of Goblinsmoker bring about half an hour of stony, sludgy doom to bear in the form of three tracks.
Leading with “Smoked in Darkness”, the band builds up a smoky, tarry atmosphere, rumbling along on bass resonance and slow-beat percussion, occasional growls of ragged vocals penetrating the densely fuzzy haze. Grinding along on a heavy-duty riff, beating away with gradually growing fervor, and ramping up the vocal presence, the song rolls on with heavy momentum, hitting its end with a solid thump.
“Let Them Rot” takes over from there, riding a buzzy guitar line into the body of the song, where it's joined by reinforcing bass and punctuating drums. Fleshing out the riff, the band cruises on from there in low gear, seeming mainly concerned with building up the atmosphere of hazardous heaviness. It works well enough, but the trudging pace, combined with relatively little variation over the course of the ten-minute track, brings things down to more of an endurance test than a good doom wallowing. The kick into active drumming in the last minute or so is a nice change, but it's also too little, too late.
Lastly, “The Forest Mourns” turns up the sludge flavoring with some amped-up feedback, though much of the rest of the approach remains the same. Tempo, tuning, rhythms, and instrumental interactions stick with the settings of the previous songs (or close enough that it's effectively the same), which may come as a treat to those who are fully in-line with things by this point, but will likely be something of a let-down to the others who've stuck it out. The band does show a good grasp of the moodiness and vibes that they want to put across, so here's hoping that they bring in a bit more range for whenever their first full-length emerges.
~ Gabriel

For Fans Of; Flood Peak, Lowered, The Sleer, Trees, Tons