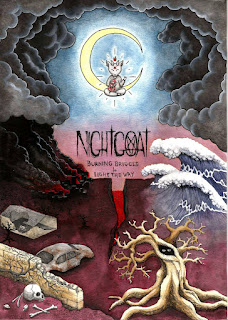 On Night Goat's third EP (following the simultaneous release of their Chicken and Egg records), the Australian group has put together just under half an hour of material, with a conceptual emphasis on the deteriorating state of the world.
Opening with “Simulacra”, the group works a slow and atmospheric groove between the bass and drums, with smokily sensuous vocals wrapping their way around the progressions. Restrained toothiness on the bass' riffs gets to come out and play in the bridges, with guitar-work and rougher singing joining in once that side's been uncovered. As things continue to develop, both sides entwine and branch off again, making for an opener that impresses with its technical panache as well as the emotiveness of the playing.
“Negative Crepe” (presumably a play on the similarly-titled Nirvana track) picks up from that high note, shifting back to the slow and moody vibes for the most part, though they do find room for some heavy and hard hits on the up-shift. It's more of a tonal trip than a rocker, but they put in such good work, it hardly feels like they're taking it easy. “Anchorite” takes over from there with a broody, simmering lead-in that practically tingles with foreshadowing. And the song delivers, working its way back and forth on intensity escalation, teasing listeners deeper into its web, edging them on with ominous build-up and leaving them eager for whatever may come.
Finally, “The Last Human Sound...” brings a conclusion that builds from the mix of melancholy and anticipation preceding it, delivering the longest song on the EP. Working a rising tension and swelling guitar presence, the band unfurls a track that I have to imagine takes on a spirit of its own in live performances. Despite its length, it's maybe the easiest listener on the EP, thanks in large part to the careful handling of the main melody. All in all, a very respectable release from this crew, and one with some deceptively sharp hooks to get lodged in the back of your mind.
~ Gabriel

For Fans Of; Acid King, Jess and the Ancient Ones, Stonerror, Wicked Lady, early Windhand