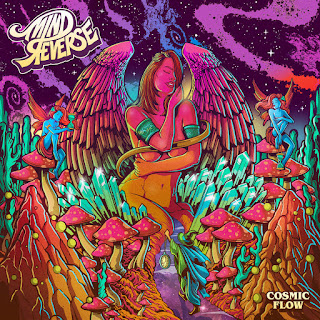 Following up on an EP and a pair of singles all released in 2017 (two years after forming the band), the Brazilian group of Mind Reverse have taken an intensive three years to assemble this, their first LP. With a hefty thirteen full songs to its run, Cosmic Flow shows the band's high-octane heavy rock, with healthy infusions of psychedelic and funk rock, and a few splashes of prog as well, all mixed together in top-notch form.
Starting off with the tasty grooves of “New Lands”, Mind Reverse get things cooking and pull the listener right on into the heat. The hooks, captivating arrangements, and permeating creativity are persistent qualities for the rest of the album as well, with quick-changing rhythms playing up the main beat, fills to get your spine bouncing, and always more room for a snazzy flourish or three. It's hard to pick out a favorite song, as the album flows so damn well through them all, and there's always new details to notice.
Fat but nimble bass-lines, deftly agile drumming, guitar-work that can switch on a dime between gritty and soaring, and vocals that wonderfully complement it all are joined by a number of other touches, with organ, flute, and keyboard embellishments making the music practically burst with enthusiasm and liveliness. There's not a false step among the songs, and the range covered by the band is made all the more impressive by how casually cool they make it seem. There's a bit of a Jane's Addiction vibe at times, but pulled off with much more sincerity, less deflective wryness, and a hell of a lot more psychedelic flair.
For the band's first album, it's put together astonishingly well. The energy is managed nicely, with a few slower groove tunes spaced out among the higher-tempo rides, letting listeners appreciate both sides without getting worn out on either. The stylistic range, as previously mentioned, is fantastic, and there's so many melodic hooks that you'll be spoiled for choice on which one to get stuck in your head. The care put into making the music is evident in every moment, though it never gets in the way of rocking out. Thoroughly impressive work, and some of the best heavy rock I've heard in a long while. Don't miss out on this one, if you have even a slight taste for heavy rock. Cheers to Mind Reverse!
~ Gabriel