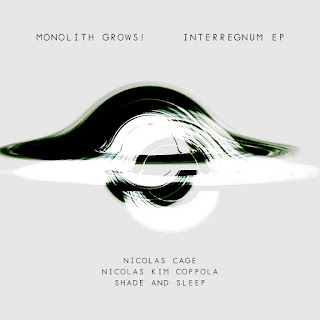 Running two tracks on vinyl, and three in digital form, this EP is the latest from Monolith Grows!, whom we last checked in on back in 2015. Back then, they were still going by just 'Monolith', and had released their Even More album. With this new release, the Italian group have assembled some deeply enjoyable and surprisingly hooky tunes to lift your spirits in the tumult of 2020, with All Right Riserva Recordz picking it up for release.
First up is “Nicolas Cage”, a rumbling cruiser working off of a solid riff, with a blend of heavy rock and stoner metal flavors keeping it fun while digging into gnarly grooves. The extensive cymbal-bashing helps with that lightening of the tone, while the vocals rock on in a nice fusion of modern and retro stylings. There's plenty of energy, and the twists taken by the melodic direction lift it above much of the output that's come through in comparable heavy music lately.
“Nicolas Kim Coppola”, the digital-exclusive track, can be heard as something of a reworking of the first, operating from a similar groove, but dropping the cymbal prominence somewhat, leading to a more grounded run that lets the guitar's tone come through better. It's also about a minute shorter overall, and ends on a fade-out, giving the impression of a 'radio edit', wherever there's radio stations cool enough to play this.
Lastly, “Shade and Sleep” fades back up into a cool drum-and-guitar exchange, before the guitar takes it solo to heat things into the main ride. The heavy rock takes a bit more of a turn into yesteryear's dynamics here, with the bass strings allowed to rattle just a bit, injecting some hang-loose cool into the vibrant head-banging energy they let loose. Loaded with still more twist-ups and break-downs, it brings the EP to a victorious close, pumping out enough energy to make listeners wanna cycle right back to the start for another go. The band describes the EP as being a shift into more acid rock territory, and judging by the quality they've put on display here, their upcoming album (currently scheduled for 2021) will be a true treat, packed with creativity and indelible hooks. As of this review's writing, there are still vinyl copies of the Interregnum EP available, but you'll need to move fast to snag one, as only fifteen are left.
~ Gabriel