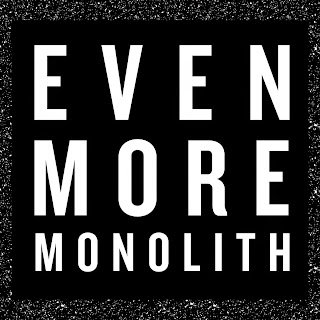 After releasing their excellent second EP Louder last year, Monolith stepped into the studio to put together their first full album, and the result is a heady trip of heavy rock with a wide streak of stoner and desert rock vibes.  Whether it's from having more room to play, or just a shift in mood, the general mood of Even More has a little less mania to it than Louder, though it does come through when they want to ride the wilder side of things.  Stretches of sun-baked warmth (heck, they even put some bongo drums to work at one point) provide the main animation for the songs, with fuzzy echoes from the bass and other lightly psych-soaked touches giving each track its own character and surprises that stay fresh several listens on.
By the time "Orange Moon" arrives with its down-beat mood to ease the album to a close, there's an impulse to just hit play again and take the ride over from the start, making for one of those perfectly self-contained albums that can stay with you for years.  If you're not already familiar with Monolith, give this a listen or three, then pick up their EPs so you don't burn yourself out too soon.
~ Gabriel