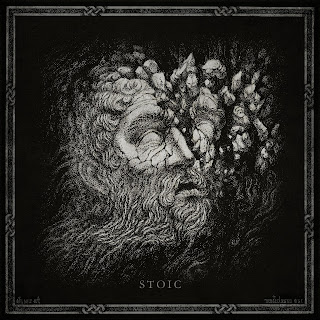 On the last album from this long-running Russian crew, the band operates at high quality in a blending of metal styles. Influences from black and death metal can be heard creeping into the base, which is largely a mix of doom and sludge. Unsurprisingly, the music is incredibly moody, and capable of shifting from aggression to withdrawn brooding on a dime.

Leading with the title track, the band establishes their MO in clear terms, and expands on it in intriguing ways through the album's remainder. From the melodic atmospherics of “Watching Emptiness” to the acoustic interlude of “Willow Forest”, threads of drone in “A Blind Man in Darkness”, and the sample/scream interplay of “Darkness Becomes Us”, Crust show themselves to be well-versed in ways of keeping the heavy music engaging and varied.

The production is well-suited to their work, letting the bass end swell into an encompassing presence, while the higher register has an interesting ceiling in the mix, providing the guitars and cymbals with a touch of compression. The gentler parts of the song-writing are integrated in natural ways, letting the band fade from one harsher section to another while keeping it impactful, and when they're in hard gear, it comes off as consistently genuine and earnestly delivered. Though it can be taken as just a wash of dark metal, there's more than enough small details worked into the song-writing to reward careful listening as well. Excellent from start to finish.