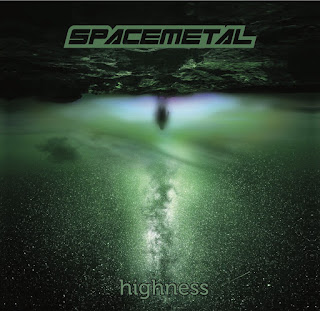 It's been a while since we last heard from the NOLA-based group of SpaceMetal; their last LP, Shroud, dropped back in 2018, and it's been fairly quiet on their digital front since then. Now, thankfully, the group has returned with another batch of songs, this time in honestly-titled EP form, to reassure the world that their heaviness is alive and well.

First of the EP's four tracks is “Stare”, an eight-minute cruiser which plays around with acoustic guitar and spoken-word vocals for an intro before diving into the deep bass and big-body riffs which make up its majority. With a wizard standing at the center of the lyrics, the band keeps a friendly vibe going through the crunch of the tunes, and the strong flow makes the eight minutes fly by. “Cry” follows, working a twistier main riff loaded with earworm hooks. Playing with rhythm change-ups and brandishing big guitar chords, the band manages to make this song feel just as full (if not more so) as the eight-minute track, despite running three minutes shorter.

The title track opens up the EP's second half, ratcheting up the psychedelic traces with some echoing vocal effects and more sedate guitar work. The drums get to come out a bit more in this one, flexing on the cymbal emphasis and experimenting with the fills mid-measure. Lastly, “The Seed” holds on to the psych touches while bringing back the acoustic guitar from the very start of the EP, providing a nice cohering element while wrapping things up. All in all, while it runs just under half an hour, there's enough depth to the songs to let listeners dive right down while it plays, and come out feeling not just that their time and attention was well-spent, but that there's more to be heard next time they spin it. Grab it for yourself once it releases June 26th, or just head over to the BandCamp now to stream it ahead of time.