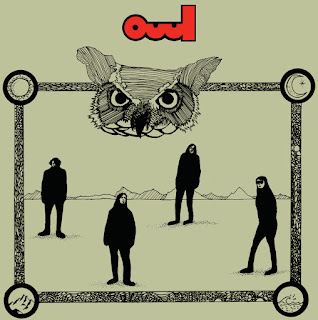 Oh, let it never be said that I don't love a bit a bit of retro rock. In fact, I have always vowed that if I ever happened to come into some money I was put it all towards the construction of a flux capacitor and a DeLorean so I could go back to a time when the good music solidly outweighed the shite. That being said, I would end up missing out on this awesome quartet.
Hailing from sunny old California, Owl have been doing the rounds for about 5 or 6 years now, twisting minds in and around their native Oakland. But recently they've taken their unique brand of stoned out psych nationwide and rocking stages from New York to New Mexico. Which is something I'm fully behind, because the more people who get to hear this band the bloody better! Why? Well, because they have seemingly planted their roots well and truly in the drug addled haze of 70's psych and early doom. Sure there's a ton of acts rocking a heavy retro vibe and doing the rounds these days, but truth be told, a whole lot of them are little more than effectively poorly conceived cover bands. This however it where Owl really stand out from the crowd. They actually manage to pull of a hell of an impressive array of classic rock stylings, give them their own unique mix and then pack them all into a mind blowing 35 minutes. Straddling the latter days of psych and the early days of doom the foursome also throw in slight elements of early punk into the mix here and there too. Think, Black Sabbath meets Focus meets Iggy & The Stooges and you're a close as I can possibly comprehend. Packed to breaking point with both haunting and complex riffage, the tone of the album fluctuates constantly without breaking or becoming disjointed. Thats a hell of a feat when trying to recapture that bygone age of technical ecstasy while all the time attempting to retain your own unique stamp on the genre. Nonetheless, they well and truly nail it from start to finish.
The album is a measly $5 but if you choose to, and I strongly suggest you should, you can pick up one of the last remaining vinyl pressings of the album. Oh, and when I say one of the last remaining, I mean ONE... because I just bought the second from last. Fear not though, the guys (and gal) plan on getting a small amount more pressed on coloured wax in the near future. However, if money's tight, or if you're tighter than a ducks butt, they've been awesome enough to hit me up with links for some of their earlier work that wont cost you a penny!
God, I spoil you.