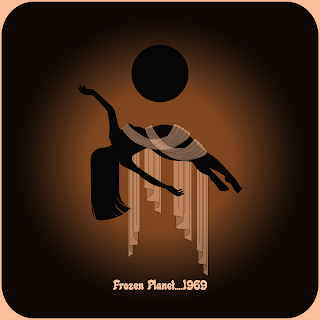 It should be no secret that we're big fans of FP69 here at TBB, as they always bring excellence with their heavy psych rock.  With this latest record, the Australian crew have again brought the magic thunder to bear, funking around on thick jammy grooves and swirling up their guitar tones with savory finesse.  Oozing bass waves and snaky drum patterns keep the songs driving forward, and while the tunes take some rambling routes, they rarely lose the momentum and undulating pulse that the band's chemistry and amped-up weight generate.
At only five tracks (and one of those an intro that lasts about a minute), it does feel like a shorter album than the band's usual fare.  But part of that is down to the smooth flow of the music, as they still hit nearly three-quarters of an hour between the other four tracks.  It's hefty stuff, but also disarmingly frisky, carrying a jazzy feel of improv and interplay between the musicians, and doing a stunning job of sweeping listeners up in that energy.  And with the last track, “Ancient Wings Taking Flight”, FP69 really capitalizes on that captivation, churning up and smoothing out their riffs until you've gotta just float along on the waves.   It's the sound of a band in their prime not settling for the familiar, and the pay-off is fantastic.
~ Gabriel