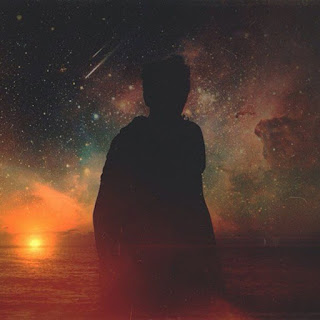 It's been too damn long since we heard from either Ksyatriya or Animi Vultus (three years and change since the former's most recent release, and over five years for the latter), so it comes as not just a delight, but a relief to get word from the groups that this split had been put together and was ready to be shared with the world.
Ksyatriya lead the way on the digital A-side, opening with the ~10-minute “(R).egimented (A).utocratic (C).ontrol (I).n the (S).ubdivision of (M).ankind”, a slabby mountain on which the band puts to work samples of diatribes by Malcolm X over craggy riffs and shuddering, thickly-reverbed tones. “Rise of the Femme Order: Bigot Cleansing” makes up the second section of the duo's record half, retaining the heavy bass presence while introducing the words of Emmeline Pankhurst for the ideological component. Both tracks feature careful development of the instrumental shaping, taking the droning thrum and directing it with nudges and anglings of the pulse, and there's a feel not unlike a sociologically-minded take on Bell Witch's “Beneath the Mask”, though the brothers of Ksyatriya give it much more distinction than that simple description suggests.
Animi Vultus' 'B-side' consists of just one track, the sprawling “Joy of Existence”, which clocks in at just over half an hour. In that space, the band grows their titan from quiet beginnings to deep snarls of doomy resonance, on through interludes of quiet menace, and into some violently energized rampages. There's a lot of discrete sectioning, with moments like their defiant digging deeper and deeper into a vein of sustained riffage that gets spikier and meaner with each pass, or the frenetic drumming so fast it's (almost) certainly programmed, or the nasty rumble that sinks, and sinks, and sinks still more. There's some real power and direction behind the voiceless doom they provide, and it finishes the split off on a decisive drop into the void.
It's been a while since I've heard an album, even a single-artist affair, that managed the kind of focus and completion of purpose that this one achieves. The two groups complement each other damn nicely, leaving listeners to guess at how much communication between them went on behind the music's construction, and the tension stretch of the last few minutes comes at a time when the musical handling should have attentive ears dangling on its string. Expect this one on the year's best releases list.
~ Gabriel