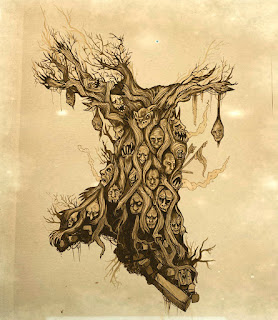 With their debut album a couple of years ago, Warrior Pope delivered one big track to serve as the whole of the LP, a mammoth they steered through experimentation on a doom foundation. With this new release, the band has opted to split their efforts into four tracks, and with that reworking of the structuring comes a wider range of styles drawn into the making of the music. The doom is still there, and strong, but there's also touches of desert rock, prog, post-rock, and psychedelic, all woven together in ways that neatly avoid feeling forced or heavy-handed.
And the development of those chords and riffs? Damn tasty. The group has quite a way with building tension and subtle layers while grinding down on a heavy progression, allowing their instruments to do all the singing and howling. The title track almost feels like an album unto itself, between the ~17-minute duration and the labyrinth of twists it follows. But by surrounding it with distinctly separate (and excellent) songs, Warrior Pope have side-stepped that semi-problem from their first album, where the waves of song growing through their changes made it difficult to recall the original forms or particular passages with clarity. Here, they take a trek that's easier to trace, without compromising the depth of the songs. And it is good. Hell, it's pretty damn great.
The biggest strike against it would be the clip-off endings for the songs. They reach satisfying endings, but then cut the track before the tones finish trailing off, generating a little amp pop in the speakers. It's not a big fault, since it fits somewhat with the organic atmosphere, but as the one thing I'd pick out against them, it does stand out. On the whole, it's hard not to recommend; the album is epic without being ostentatious, experimental without losing its way, and the savagery the music sometimes generates makes for a great contrast with their song-writing techniques. Keep your fingers crossed for this one getting physical release.
~ Gabriel