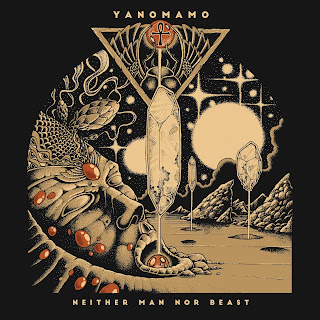 It's been a while since we last heard from the Australian crew of Yanomamo, but with their first full album (scheduled for release on CD and vinyl on October 20th), they've returned in fine form, bringing a bevy of heavy riffs to bear in a set of eight sludge-soaked songs. A choice sample from Caligula kicks off the festivities in “Blood Red, Black God”, from which the band unrolls a slow-beating assault with a sly streak of humor. They work the bass low and dirty, the drums hit hard, and the vocals are suitably grimy, with little flab or redundancy to the songs. I did find myself wanting some more feedback nastiness, but I always want more of that in my sludge consumption.
Yanomamo strike a good balance between that mean leanness and thick, tarry grooves, bringing the album in at a respectable (and vinyl-friendly) forty-five minutes or so. There's a clear stylistic continuity between the songs, but there's also a fair amount of experimenting within that stretch, with the use of flanging strings adding some of the most distinctive tones to the proceedings. Hit this up if you've been seeking some gnarly sludge with strong grooves, and rock well once you've got it.
~ Gabriel