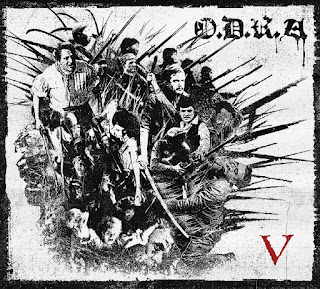 The Polish group of O.D.R.A. last crossed our radar back in 2015, with their debut album, Sexnarkoman. The grimy authenticity of their sludge snarling (not to mention their cover art style) put me in mind of early EyeHateGod back then, and two years later (with an appearance on a four-way split LP bridging the two albums) the group still sounds defiant and nasty, starting off their first song (“Motloch”) with a hocked loogie before crashing into grinding bass and ruptured howls.
But there's also some subtle refinement to their feverish aggression on this new album. As they thread together the bone-grinding riffs, there's more direction shaping the songs, even when they hit near-off-the-rails levels of riff-smashing (“Widly”, for instance). At forty minutes across eight songs (nearly a quarter of that given to the closing track, “Tkacze”), the band strikes a good balance between quick action and satisfying substance. Dragging sludge on for too long can kill an album's replay value, or at least reduce it to a few favorite and several skippers, but with the average song on V running four minutes and change, they give themselves room to experiment while still keeping it suitably lean. If you've been hungering for some genuinely nasty sludge lately, give this crew a go, and crank it up loud.
~ Gabriel