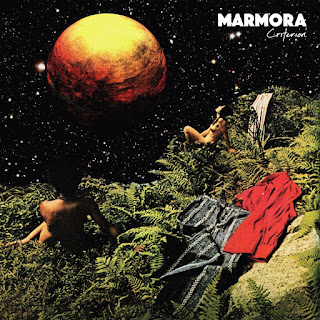 With this debut EP, the Chicago-based quartet of Marmora introduce themselves to the world in high style, with the three brothers Salazar (Alejandro on bass, Ulysses on drums, and Zaid on guitar) joined by Allen Cardenas on vocals/synth/guitar. Leading with the title track, the music strides out into a rich blend of '70s heavy metal and modern heavy rock, working tasty licks and solid riffs, with bridges that ramp up the energy and quickly kick ass. “Apathy” follows, quickly putting lie to the name by busting out some hard, near-punk raucousness, and barreling along on a drum-bass combo chugger that belts along with building power into a crashing finish. And lastly, “Flowers in Your Garden” twists back into the heavy rock/metal terrain, growling out another beastly riff dabbed up with some bluesy sighs from the guitars, and coming to an end with pizzazz.
As the group's first record, it shows off a lot of strengths, and hardly any weaknesses. Part of that can be chalked up to coming in under a quarter of an hour (angling for a possible 7” release?), but that trimness also means that anyone with an ear for heavy music should be able to squeeze this into their tight schedules and enjoy it. It's also likely to leave listeners eager for more, and (if they're like me) wondering how the group handles their stuff live. For the answer to the last part, readers near Chicago can catch a show on the 4th of November, over at The Drunken Donut in Joliet. See 'em for those who can't, and keep your fingers crossed for more Marmora in the near future.
~ Gabriel