The Anatomy Of A Turntable... 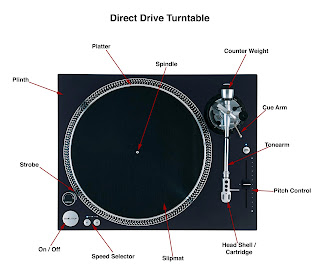 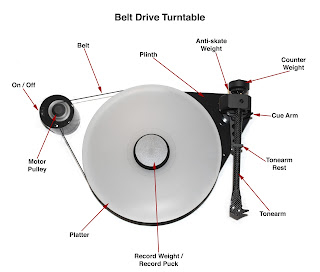 • Anti-skate Weight - This small weight will dangle off the back of the tonearm. This stops the arm from just sliding (or skating) across your favourite record and towards the spindle. It's position is determined by the weight of the cartridge you're using.

• Cartridge - The beating heart of your table. The cartridge contains the stylus (needle) which runs over the microscopic grooves and converts them into what you hear. A potential fragile piece of kit, it's advised to leave the provided guard on when not in use.

• Counterweight - The large weight that hangs from the back of the tonearm. When rotated it will slowly slide up and down the rear of the arm. This adjusts the arms balance and is used to fine tune the down force or 'tracking weight' of the cartridge onto the record.

• Cue Arm - Also referred to as the cueing lever, this device raises and lowers the tonearm on and off the record, allowing you to 'drop' the needle at the beginning or desired point in the album.

• Headshell - Most modern tonearms no longer incorporate this feature. The headshell is a detachable section of the tonearm that allowed the user to replace or swap over different cartridges without the necessity of completely unscrewing and setting the new cartridge from scratch

• On/Off - This should be pretty self explanatory.

• Pitch Adjustment - (Direct Drive Tables Only) - This allows the the user to adjust the speed at which the platter spins. Not a regular feature, it's almost exclusive to DJ turntables.

• Platter (Main) - Driven by the belt, this is the part that is designed to move, rotating the record beneath the cartridge.

• Plinth - The main body of the turntable, sometimes simply referred to as the base. Usually the weightiest part of the table to aid dampening of vibrations.

• Slipmat - This sits between the main platter and the LP and serves to isolate the record from vibration thus improving the sound quality. Most commonly made from felt or cork you can experiment with different materials to produce subtle nuances in the albums sound.

• Speed Selector - Usually just two rpm options here - 33 and 45, but sometimes you may well find 78. The vast array of belt drive tables don't tend to offer this feature. Instead you may well have to manually move the belt from one of part of the motors pulley to another allowing it to either increase or decrease the platters turning speed. Alternatively many manufactures offer a separate unit which the turntable will plug into instead of directly into the mains supply. This unit then alters the frequency delivered to the motor allowing it to run at different speeds at the flick of a switch.

• Tonearm - This is the pivoting arm that holds the cartridge.