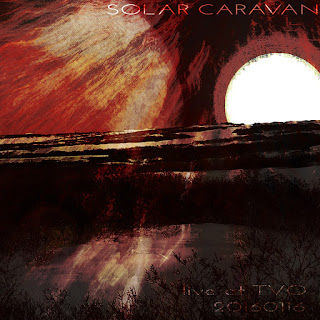 It's been a while since we've checked in on Acid Elephant, but in the years since their last studio album, Star Collider, they've continued outputting live material at a fairly steady rate. Solar Caravan is the latest recording to capture the group in their live setting, and over the course of its three tracks, they show that they've been hard at work growing their heavy psych power. Massive riffs, rumbling bass, crashing drums, tight grooves, and enough distortion to make your head swim; they've got them all, with the grit and grime to tar your speakers into suitable earthiness. While all the songs are great, the show-stealer is undoubtedly “Radien”, a ~22-minute burner that smokes its way through a few dozen turns in structure, developing a sinister but still psychedelic haze of resonance and tone. As one big EP, it's a fun trip, and Acid Elephant's continued workshopping of their material should keep fans eager for the next full studio effort to arrive.
~ Gabriel