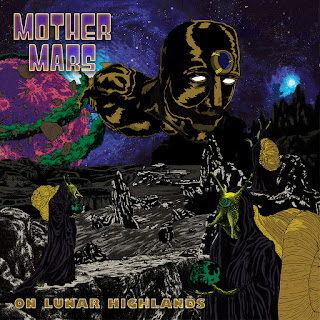 Like the rest of Pepper Shaker Records' line-up, we're big fans of Mother Mars here at The Burning Beard, even if their Australian location does preclude us from catching them live.  So it was a jolt and a thrill to hear that the heavy psych group has another album coming up, and we jumped at the chance to give it an early listen.  And while it's been a couple of years since their last full release, the very fine Black Coffee and Good Advice EP (and four years since their last album, Steam Machine Museum), there's no rust to be heard in the quartet's jammy performance as they launch right into a groovy roller with “Wrecker's Reunion Ball”, getting down and turning it out.
And as they ride on, Mother Mars show that they've been brewing up plenty of new tastes for their fans, while staying true to the fuzzy funkiness and bluesy bent (not to mention a strong shot of spaciness) that makes their heaviness so damn enjoyable. Whether cruising along on a steady riff or blowing it up into expanding madness, the band keeps a through-line of deep-toned rock going, balanced with enough exotic elements to help them stand out even more from similar acts. There's chill material, fiery stuff, goofy fun, and serious rock. Whether you're new to the band or a long-time listener, you're gonna have a good time with this album. Don't miss it, you hear?
~ Gabriel